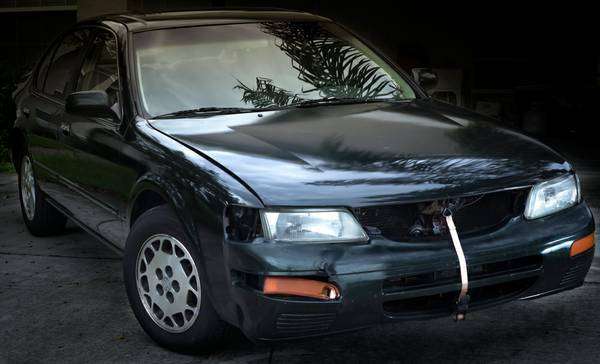 Luke Aker decided to sell his well-loved 1996 Maxima on Craigslist and produced one of the greatest ads of all time, complete with gravel-voiced narration and professional video. The $1,400 asking price seemed a bargain given the excellent ad and to someone, at least, it was bargain basement. Who that someone is will surprise you.
Advertisement

"There is luxury in a Bentley, speed in a Ferrari, comfort in Bugatti. For everything else, there's this 1996 Nissan Maxima, aged 17 years." The ad begins. Aker's ad lists the car as a "pavement-yacht" having a ride "as smooth as a Pegasus' backside" and describes the various leaking fluids as being "released into the wild when the great Maxima" has decided its time has come. He describes the tie-down strap holding the hood down as a Unifying Grasp and Lift safetY (U.G.L.Y.) restraint.

For all of this majestic Maxima-ness, the seller, Aker, asks only $1,400 U.S. Dollars. A small price to pay for worn-in leather seating, a V6 engine and automatic transmission that "gets you there, most of the time." and the other Maxima awesomeness offered with this sale.

So who bought this "warrior land-ship-yacht" with the scars to prove it's been to war and back?

Nissan bought it. Yes, that's correct. Dan Bedore, Nissan's Director of Product Communications, purchased the 1996 Maxima for $1,400 and donated another $1,000 in the seller's name to the Wounded Warrior Project, Aker's charity of choice.

Now, the company isn't sure what they should do with the car they've purchased. They're asking readers of Motor Authority to decide the fate of the car (participate here).

To see the awesomeness that was this ad, visit its Craigslist page here and watch the video below.