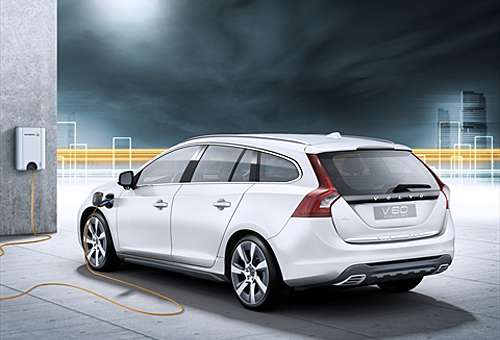 Volvo has confirmed that it will bring the Volvo V60 plug-in hybrid to market in 2012. It is the result of close cooperation between Volvo and Swedish energy supplier Vattenfall.
Advertisement

Volvo is being vague on when exactly the V60 plug-in hybrid will launch in 2012. It also appears at this point that it will only be available in Europe. No specific U.S. launch information has been announced.

What makes it unique compared to the Toyota Prius Plug-in Hybrid that will be on sale soon in the U.S., is the Volvo V60 plug-in hybrid comes with a diesel engine. All other hybrids sold come with gas engines.

The combination with the diesel engine is the best of both worlds. It offers the ability to run on electric power only around town and in the city for up to 50 kilometers or approximately 30 miles (much better than the Prius range of about 13 miles).

When the electricity shuts off and the diesel kicks in, the range becomes fantastic. The 2012 Volvo V60 Plug-in Hybrid has an estimated range of 1200 kilometers or 750 miles. No other wagon on the market currently has that extended range. Fuel costs are estimated by Volvo to be one-third compared with a conventional combustion engine.

At Volvo Car Corporation, work on the V60 Plug-in Hybrid progresses in parallel with development of the Volvo C30 Electric, which runs entirely on electricity. The third leg in Volvo Car Corporation's electrification strategy is empowering the upcoming engine generation with hybrid technology.

"These two car types complement one another. With a plug-in hybrid the driver is entirely independent of recharging stations when driving long distances. The future electric-car market will feature a mixture of both all-electric cars and plug-in hybrids. No industry or organization can tackle the climate challenge all by itself. It is our mission to develop carbon dioxide-lean cars, but it is the society that is responsible for creating a sustainable future. This project shows how cooperation between experts in different areas brings us closer to the transition from individually carbon dioxide-lean products to a climate-smart lifestyle," said Stefan Jacoby, president and CEO of Volvo.

Not only is the Volvo V60 Plug-in Hybrid going to be green to drive, it's also going to have some scoot to it and good handling thanks to on-demand all-wheel drive. (Electric motors produce torque at low RPMs for strong acceleration.) The wagon is estimated to hit 60 mph from a dead stop in a click under seven seconds. It has almost 300 horsepower and 440 lb. ft. of torque thanks to its diesel powerplant.

The front wheels of the V60 Plug-in Hybrid will be driven by a five-cylinder 2.4-litre five-cylinder turbodiesel, which produces 215 horsepower and maximum torque of 440 Nm. The car features a six-speed automatic transmission. The rear axle is powered by an electric motor producing 70 horsepower. The electric motor receives its power from a 12 kWh lithium-ion battery pack, located under the load floor.

The compact battery pack of the 2012 Volvo Plug-in Hybrid consists of 10 modules with 20 cells in each module. It has an integrated computer that monitors and compares the temperature and charge level in each of the 200 cells. The battery pack also has an integrated water-cooling system, which is a connected to the car's climate control unit.

The driver chooses the preferred driving mode via three buttons on the instrument panel: Pure, Hybrid or Power. The interaction between diesel and electric power is handled via a control system. Pure is when the car largely runs on electricity. In hybrid, the diesel engine and electric motor interact to provide the optimal balance between driving pleasure and low environmental impact. In power, the technology is optimized to give the car the best possible performance.

Anonymous wrote on October 17, 2011 - 5:34pm Permalink
Is it possible to import one to the U.S. from Europe? Get left-hand drive?
Anonymous wrote on November 26, 2011 - 1:41am Permalink
The design of new volvo parts for this hybrid model is perfect to compete with Toyota Prius which is one of the pioneer of hybrid models. I think the features like hp and automatic transmission will catch the attention of new owner.

Toyota's First EV Will Have a Name of BZ: Toyota BZ
First Videos From Inside The Boring Company's Las Vegas Loop
END_OF_DOCUMENT_TOKEN_TO_BE_REPLACED