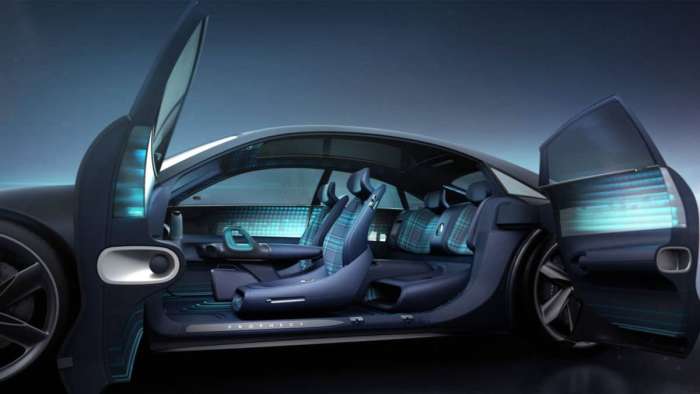 Hyundai’s Prophecy EV concept, which strongly hints at the future designs of the Ioniq EV brand, is the Tesla fighter the brand craves. The Prophecy was honored with a prestigious 2020 Car Design Award for its design identity. It’s a head turner.
Advertisement

Hyundai’s exciting Prophecy EV concept, which outshines anything Tesla has to offer currently, received the 2020 Car Design Award in the “Concept Cars” category. Prophecy nabbed the prize for its Sensuous Sportiness design identity and innovative elements.

Everything about this car is stunning, which is where Hyundai needs to head for a successful EV future. Tesla is the 800 lb. gorilla of electric vehicles. For Hyundai to succeed in this space, it needs a show stopper like the Prophecy that can directly fight the Tesla Model 3. Slapping an EV powertrain in a Sonata isn’t going to do the trick.

In part, that’s why Hyundai launched the IONIQ brand dedicated to EVs in August. It aims to introduce three new dedicated models over the next four years with more innovative models to follow. The creation of the IONIQ brand accelerates Hyundai’s plan to lead the global EV market.

It can’t beat Tesla without some exciting product offerings. Hyundai will be launching a range of numerically named EVs under the new brand, with the even numbers used for sedans and the odd numbers for SUVs. The first model under the IONIQ brand will be the IONIQ 5 midsize CUV that will launch in early 2021. It firmly targets the Tesla Model Y.

The Electric Midsize SUV segment is becoming a crowded space. The Volkswagen ID.4 debuted in September. While not as sharp as the Prophecy or Model Y, the ID.4 will cost 35% less than the Tesla.

Why The Prophecy Won
According to Hyundai, the jury praised Prophecy for its aerodynamic, natural shape inspired by streamlined sedans of the 1920s and 1930s, which is combined with a series of technical innovations. “Nautical” inspiration came in the form of such details as the heat-extracting, propeller-style wheels. Rather than mimic a conventionally powered car, Prophecy has no grille between its pixel headlamps, and the pixel design repeats with tail lamps that give the rear a sports car-like flourish. 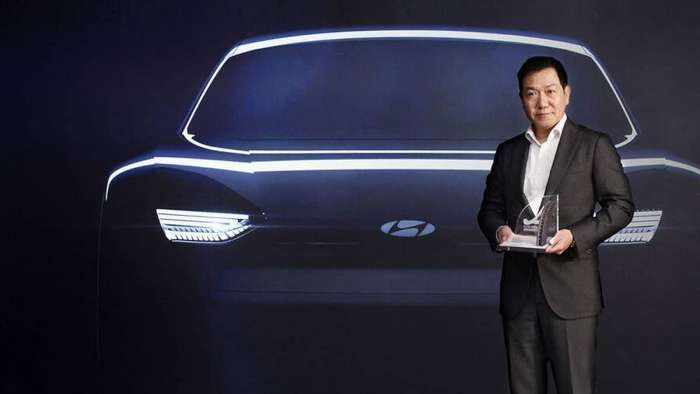 SangYup Lee, (pictured with the award) senior vice president and head of Hyundai Global Design Center, said, “When we develop our concept cars, we look everywhere for inspiration, whether it’s the fashion or mobility industry. With Prophecy, we tried to create a really positive optimism for the future based on very simplistic single curve forms that are memorable of eras of aerodynamic and streamlined cars but projected into the future.”

The Korean automaker also said Prophecy applies the Sensuous Sportiness design identity in ways not seen before in Hyundai’s fleet. It is evident in the voluptuous side section, which is like that of a perfectly-weathered stone. It is cut by a clean and simple One Curve streamline, which extends from the front to rear with minimalist restraint. This underlines the timelessness of its design. The dynamic and elegant boat-tail line created by the rear quarter panels appear to propel the form forward even when it is standing still.

Prophecy Designer Returns
Hyundai’s commitment to the design elements of the Prophecy were further cemented this week when the Korean automaker welcomed back its former chief design officer Luc Donckerwolke, who designed the Prophecy. He steps into the newly created role of chief creative officer. Donckerwolke will be in charge of design-related communications about topics such as Genesis brand, the dedicated BEV lineup brand IONIQ and fuel cell vehicles.

Organized by Auto&Design magazine, the Car Design Awards were first established in 1984 and are presented annually in Turin, Italy. Due to COVID-19, the awards were held digitally for the first time this year. The awards are assigned by an international jury made up of representatives of some of the most prestigious automotive publications in the world.

Keith Griffin covers Hyundai and Kia at Torque News. He has been writing continuously about cars since 2002. Keith used to be a researcher/writer for US News & World Report, as well as numerous car sites, including Carfax and Car Gurus, and a contributor to The Boston Globe. Most recently, Keith was the managing editor for American Business Media. Follow Keith at @indepthauto on Twitter and on LinkedIn.