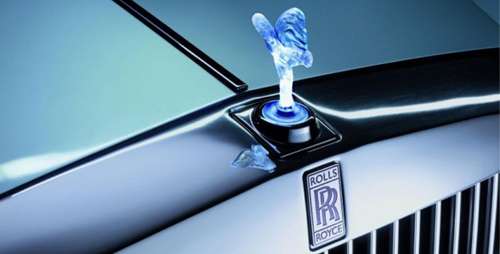 Rolls-Royce Will Debut a Fully Electric Phantom in Geneva

On the heels of BMW announcing major electric vehicle plans, Rolls-Royce has announced it will unveil a 102EX, a one-off, fully electric powered Phantom, to debut at the Geneva Motor Show on March 1.
Advertisement

It makes sense that Rolls-Royce has made the commitment to an electric Phantom in light of BMW's focus on electric vehicles. BMW has had a fleet of electric Minis in the United States for the better part of two years.

Rolls-Royce is being vague at this point with information on the 102EX. It has released an image of the Flying Lady hood ornament (see photo) as well as images of the headlamp design and the stylish meter that shows how much battery life is left.

The Rolls-Royce that is making its electric debut is going to be a mule of sorts. This Phantom is going to spend the rest of 2011 touring Europe, the Middle East, Asia and North America to collect data that will help Rolls-Royce decide what its future is going to be in alternative drive-trains. Somehow, it seems odd to think of a Rolls-Royce being absolutely quiet on acceleration.

“We have engineered the world’s first battery electric vehicle for the ultra-luxury segment,” said CEO Torsten Müller-Ötvös, speaking from the company’s headquarters in Goodwood. “With this vehicle, we begin an exploration into alternative drive-trains, seeking clarity on which alternative technologies may be suitable to drive Rolls-Royce motor cars of the future.”

The Rolls-Royce CEO also said it's going to be important for the manufacturer to maintain the brand's noted quality. It needs to develop a vehicle that has all the power and smoothness of a Rolls with absolutely no compromises on interior quality.

Back in the summer of 2009, I had the occasion to drive both the hardtop and softop versions of the Phantom that each cost about $430,000 (or about twice what my wife and I paid for our house and the Dodge and Mazda we drive). Both coupes were incredibly smooth to drive regardless of the road surface.

The Phantom is powered by a 6.75-litre, naturally aspirated, V12 engine (developed by its parent company BMW). It has 450 horsepower and 531 lb. ft. of torque at 3500 rpm. The best feature is 75 percent of engine power is available at just 1000 rpm. That means departures from dead stops are amazingly smooth. You’re never going to chirp the tires in a Rolls Royce, but you are going to achieve a 0-60 time around 5.7 seconds.

Any and all roadway imperfections are swallowed up by the Phantom with nary a blip in the passenger compartment. The ride is appropriately floaty, but the driving experience is contained and it feels like you’re driving a much smaller car than its more than 18-foot length would suggest.

The Phantom tips the scales at 5776 lbs. but delivers a decent 11 mpg around town and an impressive 18 mpg on the highway. Don’t laugh. Those are good numbers for a car that weighs almost three tons and is dripping with luxury. It runs on premium fuel but that’s hardly an issue for Rolls Royce owners.

Also, according to online reports, BMW is creating a new sub-brand that will be unveiled on Feb. 21. (Apparently BMW doesn't celebrate Presidents' Day.) The new BMW sub-brand will consist of electric and alternative-fuel vehicles. The first car to be launched appears to be the Megacity Vehicle that hits dealer showrooms sometime in 2013. It is based on the platform of the new BMW 1 series, so it's not going to be a huge vehicle but it's a start.

Rolls-Royce said there are no plans to develop a production version but would the company go to this kind of public display not to be strongly considering it? As one of the company’s EX models, Rolls-Royce says this Phantom will serve to begin a dialogue with existing owners and stakeholders, posing as well as answering questions of its audience.

Now might be the right time for Rolls-Royce to be dipping its toe into the electric vehicle pool. Coming off a down year when only 1,002 cars were sold, Rolls-Royce had its best year ever with worldwide sales of 2,711. That’s a 171 percent improvement over 2009 and more than doubles the previous record of 1,212 in 2008.

There's also a certain buzz surrounding the brand in design circles. Rolls-Royce, which has been winning design awards for its new Ghost, hired Giles Taylor away from Jaguar. It’s a major loss to Jaguar because Taylor was a well-regarded design manager at Jaguar. He will become the director of exterior design at Rolls-Royce, which is owned by BMW.

In preparation for the Geneva debut, Rolls-Royce will launch a 102EX website this week, a portal to fuel a wider global debate seeking views on the question of electric luxury from media, VIPs and stakeholders. The site will also deliver regular updates of the car’s progress while on tour. The most important data to come out of testing for this electric vehicle from Rolls-Royce will, no doubt, be its range and performance in all types of weather. Luxury owners will demand the highest level of expedient recharging.

nicopatterno wrote on May 4, 2011 - 5:36am Permalink
Having an electric powered <a href="http://www.racepages.com/oem/rolls_royce.html">rolls royce parts</a> would be so awesome! The phantom is one of the most sought after car together with the ghost. The car itself represents luxury and innovation that puts the car to the top of the motoring world.