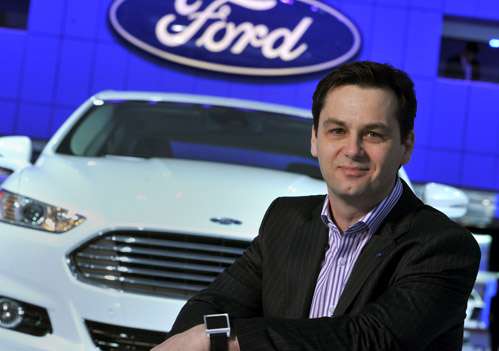 The 2013 Ford Fusion has won the Gene Ritvo Award, which honors the best in design in the automotive world, from concept to production to marketing. The honor is awarded to the vehicle that best defines elegance in design.
Advertisement

The award was presented by the New England Motor Press Association at a gala dinner on the campus of the Massachusetts Institute of Technology. Chief Fusion designer Christopher Hamilton was on hand to accept the award, one of the first presented to the all-new 2013 Ford Fusion.

This award was slightly different from the dime-a-dozen awards handed out by press associations, which is why most media outlets won't cover them. This time, NEMPA partnered with the Boston Museum of Fine Arts and the Larz Anderson Auto Museum in Brookline, Mass., in judging the awards. It may have been the first time an automotive press association has partnered with two major museums in presenting a design award.

The accolade, called the Gene Ritvo Award for Design and Elegance, honors the best in design in the automotive world, whether it’s a concept car, production vehicle, a marketing campaign or a particular element of a vehicle that defines elegance in design.

“It is an honor to accept this award on behalf of the team behind the all-new Ford Fusion,” said Chris Hamilton, Fusion chief designer. “The 2013 Fusion has a revolutionary design that puts an accent on elegance: It has a sophisticated feel and a sleek profile setting it apart from traditional midsize sedans.”

“When reviewing all the entries for the Design and Elegance Award,” said Meghan Melvin of the MFA, “we appreciated the simplicity of line of the Fusion’s detailing, the subtle shaping of the hood and the distinctive front composition of the vehicle.”

• Perceived efficiency: Fusion character lines sweeping to the rear and thin roof pillars suggest the car is nimble and light on its feet

“Gene would have been pleased to see a car like the Ford Fusion win this award,” said Keith Griffin, NEMPA president (and author of this article). “It’s an elegant vehicle that is a true head turner. At the same time, it’s practical transportation. I was happy to see the Museum of Fine Arts and Larz Anderson – who partnered with NEMPA for the first time this year in judging the entries – select this as the winner.”

Plus, as more than one automotive journalist has noted, the Ford Fusion, because of its exterior design and interior features, is going to give Lincoln a run for its money. The common sentiment is, "Why drive a Lincoln when you can buy a Ford that looks like an Aston Martin?"
The award is named for the late Gene Ritvo, a devoted NEMPA member and veteran concours photographer who had an unusually keen eye. The first Ritvo Award was presented in May 2011 to Infiniti for its marketing campaign that focused on design and elegance.

The 2013 Ford Fusion debuted at the 2012 North American International Auto Show in January.