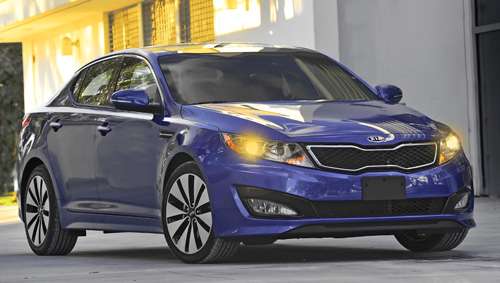 LPGA Winner Will Drive Off in New Kia Optima

Next week's winner of the LPGA's Kia Championship bein held March 19-25 is going to walk away with a check for $255,000 and a 2012 Kia Optima Limited. It's just one of a few Kias that will be given away this year to LPGA players.
Advertisement

In addition to the Kia Classic winner, Kia will honor the outstanding achievements of LPGA players this season by presenting the winners of the Kia Performance Award with an Optima Limited. The awards, which will be presented at the CME Group Titleholders event in November, include:

• Kia Power Drive – Awarded to the player with the longest average driving distance
• Kia Drive to the Top – Awarded to the player with the most Top 10 finishes
• Kia Most Compelling Performance – Recognizing a player with exceptional performances throughout the year; this award is chosen by fans through an online vote
• Kia Community Assist – Recognizing a player who makes exceptional contributions to charity organizations or community programs

"Kia is one of the fastest growing auto brands in the U.S., and sports marketing initiatives such as our involvement with the LPGA have significantly raised awareness and consideration for the brand and our vehicles," said Michael Sprague, vice president, marketing & communications, KMA, in a news release. "We are pleased to offer an enhanced prize package for the winner of this year's Kia Classic. The Optima Limited is Kia's most refined and premium product offering to date, and we are excited to showcase the vehicle to golf fans at the Kia Classic and reward some of the tour's best players for their outstanding performances."

Following strong event-attendance and TV-ratings growth in the tournament's second year, Kia signed on as the "Official Automaker of the LPGA." Kia also serves as the "Official Tournament Vehicle" of eight LPGA events.

The LPGA isn't the only sporting arena where Kia has made a splash recently. During the fourth quarter of Super Bowl XLVI, it aired a spot, titled "Drive the Dream." In it the new 2012 Optima Limited races through a Gen X couple's wildest thoughts as they sleep, including: Victoria's Secret Angel Adriana Lima waving the checkered flag at a speedway; an in-your-face Mötley Crüe concert; mixed martial arts legend Chuck Liddell battling in the ring; a heroine and hunk on horseback in a romance novel setting; champion bull rider Judd Leffew taming a bucking rhinoceros; and a fairy tale ending.