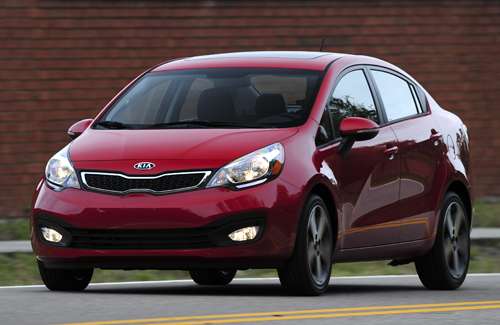 The announcement that the 2012 Kia Rio EX has come on top in a comparison test among subcompacts might be surprising to the uninitiated but it comes as understandable to those who have been watching the Korean manufacturer closely the past couple of years.
Advertisement

As Consumer Reports proclaimed in a press release, "With its nimble handling and well-equipped cabin, the Kia Rio EX outpointed the Hyundai Accent and Chevrolet Sonic as the top rated subcompact sedan in Consumer Reports' latest tests." CR added, " The Rio's hatchback version scored lower, but sits firmly in third place behind the previously tested and higher-rated Honda Fit and Nissan Versa SL among the subcompact hatchbacks tested with automatic transmissions."

Detractors may say that Consumer Reports is singularly able to examine subcompacts but that's not the case. Their in-depth testing is unparalleled by any other automotive organization, including any of the self-inflated buff books. Plus, their testing facility makes your mouth water for its perfect pavement, great variety, and off-road rock climb that will rattle your fillings.

Champion hits on a good point with his observations about sub-compacts. For years they were treated as disposable by OEMs but now, with gas prices rising, and increased focus on CAFE standards, sub-compacts have become increasingly focused on. Treat the customers right with the introductory level vehicles and they may stay with the line forever.

Kia has done well with its small cars (and now its midsize sedans). Here is what CR had to say about the Rio EX. " The Kia Rio is a solid and well-equipped car. It benefits from nimble handling and very simple controls and provides plenty of features for the price. The Rio sedan is the top-scoring car in its class while the competent hatchback ranks midpack. The Kia Rio EX sedan ($17,275 MSRP as tested) is powered by a 138 hp, 1.6-liter four-cylinder engine that has decent power and gets 30 mpg overall, one mpg better than the tested EX hatchback ($17,475 as tested.). The six-speed automatic transmission shifts smoothly.

"Ride and noise can't escape typical subcompact limitations, but both are tolerable. Braking is Very Good. The sedan's trunk is roomy while the hatchback's small back window reduces rear visibility."

Other models in the test were the Toyota Yaris, Chevrolet Sonic, Hyundai Accent, Nissan Versa, and Honda Fit. All of the models in Consumer Reports latest tests were redesigned for the 2012 model year. Previous subcompact tests included the refined Ford Fiesta and sporty Mazda2, both new for 2011. The top-scoring Honda Fit is a earlier design, dating from 2009.

Consumer Reports found the new Chevrolet Sonic to be a relatively refined model that offers a quiet cabin for the class, agile handling, and excellent braking. But testers found the Sonic's fuel economy is mediocre in this segment. CR also tested a top-level Sonic LTZ hatchback with a turbo engine and a manual transmission, but it was expensive at nearly $20,000, and didn't live up to its sporty aspirations.