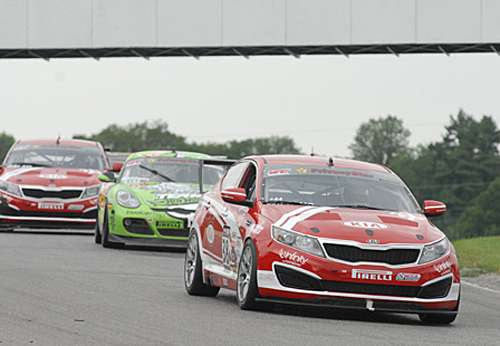 Kia racing had to head north of the border but it finally has not one, but two victories thanks to wins at the Pirelli World Challenge Championships at Canadian Tire Motorsports Park.
Advertisement

After Michael Galati scored Kia’s first Pirelli pole and win on Saturday, it was teammate Mark Wilkins who qualified fastest on Sunday and then drove his No. 38 turbocharged Infinity Audio Optima to victory, making it two-for-two for Kia Racing.

“It is so amazing to score my first pole and win for Kia Racing at my home track,” said Wilkins, who lives less than an hour from race venue in Aurora, Ontario, in a release posted by Kia. “The Optima turbo is awesome, and we never put a foot wrong this weekend. I had one moment late in the race when I thought I had picked up a vibration. That caused me to back out of the throttle a bit, and Michael (Galati) was able to get by me for the lead. But he had some damage from early in the race, so I was able to retake the lead the next lap, and I never looked back.”

Galati qualified second and started Sunday’s race on the outside of row one, just as Wilkins did on Saturday, but contact with the third-place-qualifying Mustang at the wave of the green flag resulted in damage to the right front of the No. 36 Infinity Audio Optima. The five-time World Challenge champion was able to run second for much of the 31-lap contest, and even grabbed the lead from his teammate for a brief moment, but ultimately, the car’s handling deteriorated and he slipped to fifth.

“I took a big hit right across the front at the start,” said veteran racer Galati. “The car was still drivable, and we were able to keep a good pace for most of the day. But at the end, it was getting worse and worse, and eventually, it didn’t want to turn and I couldn’t hold the draft with Mark (Wilkins) and the Porsche. We can’t complain about another top five, though, and I’m really happy for Mark to get his first win. It’s been a fantastic weekend for Kia and Kinetic Motorsports.”

Galati’s performance this weekend moved him up from fifth in the driver’s championship to fourth, and Wilkins, who didn’t start the season until round five, moves into the top 10. Kia sits fourth in the manufacturer’s championship behind Ford, Acura and Chevrolet. Rounds eight and nine of the Pirelli World Challenge will be broadcast on the NBC Sports Network Saturday, July 7 at 5 p.m. ET. (Time and date subject to change. Check local listings). The Kia Racing Infinity Audio Optimas will be back in action at Mid-Ohio Sports Car Course August 3-5.