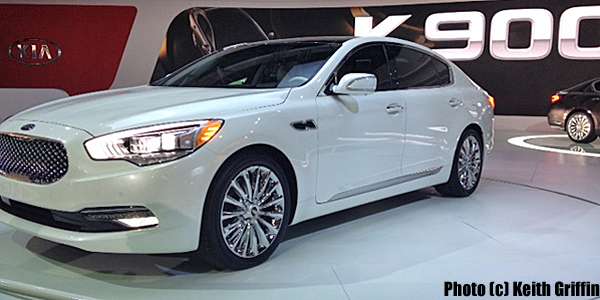 Is the Kia K900 Stunning Enough To Crack the Luxury Market?

Kia is in the midst of introducing the 2015 Kia K900 to the American automotive journalists in Orange County. Has the brand succeeded in making it stunning enough to be a success in the luxury market?
Advertisement

Kia is in the midst of introducing the 2015 Kia K900 to the American automotive journalists in Orange County. Has the brand succeeded in making it stunning enough to be a success in the luxury market?

My first impression, after spending the day with it driving the California coast and inland, is yes. The silver Kia K900 I co-piloted over 200 miles of driving did succeed in turning heads – not an easy thing to do in car obsessed Southern California.

Thanks to LED headlights, the Kia K900 looks great from the front. The sides, frankly, don't scream luxury, and the trunk is nice but doesn't scream look at me.

Yet, that could be the secret to the K900's success. Kia has made an attractive car that its owners will be happy to drive. Yet, it won't be so flashy and so distinctive that others will automatically know it's a Kia, which has the reputation as being a value brand.

Think about it. If you're the type who has $66,000 to drop on a luxury car, but not the additional $20,000 for a German luxury car or a Lexus, you still want a nice looking ride. However, you may not be ready to confess to the world that your wallet isn't quite as deep as you like it.

By the way, full review of the Kia K900 (and its amazing interior and technology) upcoming in the next few days.

Anthony Das wrote on February 12, 2014 - 7:50pm Permalink
Nice looking car better for money, need more information. Thank you
Keith Griffin wrote on February 17, 2014 - 10:58am Permalink
Full review should be coming later this week.
Marvin McConoughey wrote on February 16, 2014 - 8:49pm Permalink
The Kia K900 with its new styling and long wheelbase as standard is a far better buy than my 2014 Mercedes-Benz E550 4Matic. The Kia has more back room, a better designed front suspension, and its automatic transmission has eight gear ratios rather than the seven that the Mercedes is limited to. I won't even dwell on the fact that the $400 or so heated steering wheel on the Mercedes is available only if the buyer agrees to pony up another $4000+ for a navigation system with a small screen. I expect that the Kia K900 will also ride better than the Mercedes and be much quieter. It is surprising how much road noise gets through on the Mercedes.
Keith Griffin wrote on February 17, 2014 - 10:58am Permalink
Interesting point about the road noise. I spent a couple hundred miles driving this car around Orange County, Calif., last week and it is one quiet ride. Granted, those roads are pretty good but even under hard acceleration, not a lot of noise came through the cabin.