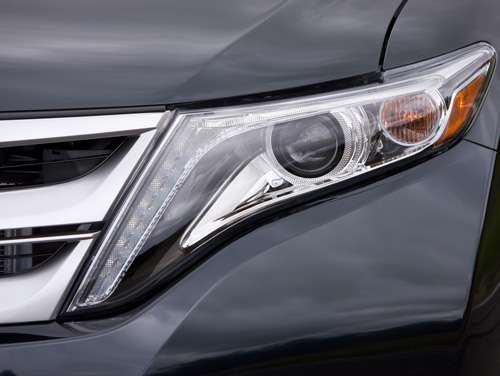 A teaser image was released today that forecasts the enhanced exterior styling of the 2013 Toyota Venza that will debut at the 2012 New York International Auto Show that run April 6 to April 15 at the Jacob Javitts Center in Manhattan.
Advertisement

The Toyota Venza is a surprisingly good crossover utility vehicle that has, until now, been a victim of Toyota's parade of blandness. Enhancements to it will help what is a good product that deserves more acceptance.

Toyota isn't ready to reveal extensive details, which was created exclusively for the North American market in 2008, but this much is known: Venza’s aerodynamic shape has been modified with a new upper and lower grille, fog lamps and rear taillights. New standard features include display audio, blind spot mirror, puddle lamps and outer mirror turn signals.

The Venza design was the creation of Toyota’s Calty Design studios in Newport Beach, Calif., and Ann Arbor, Mich. Calty designers leaned toward a sleek concept with a wide stance and sporty exterior, that included important SUV attributes, such as cargo space, towing capability and available all-wheel drive performance.