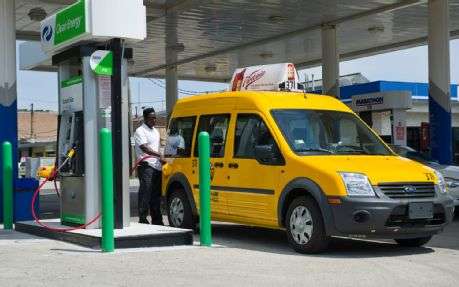 The next time you hail a taxi in Los Angeles it could be the new Ford Transit Connect CNG taxi that is now hitting the streets on the West Coast.
Advertisement

The Transit Connects are already in operation in Hartford, Conn., among other markets like Las Vegas and St. Louis. Chicago is another city where CNG-powered Transit Connect Taxis are in service already. Taxi Medallion Management put 12 of the vehicles into service in June.

“Taxicab operators will save up to $2 per gallon over gasoline at the pump,” said Mitchell Pratt, chief operating officer, Clean Energy. “Because the vehicles’ tailpipe emissions are near zero, Ford’s CNG Transit Connects qualify to drive in California’s carpool lanes and, compared to petroleum versions, will reduce greenhouse gases by almost 30 percent.”

Dallas-based BAF Technologies has been certified by Ford as a Quality Vehicle Modifier to convert standard Transit Connect Taxis into CNG-powered cabs. The standard Ford Transit Connect – 2010 North American Truck of the Year – features a 2.0-liter I-4 engine that gets 22 mpg in the city and 27 mpg on the highway, an estimated 30 percent improvement in fuel economy compared with traditional taxis.

The powertrain isn’t the only reason orders are expected to continue coming in for the Transit Connect Taxi. Roominess, for example, is a big factor for many, said Craig Cannons, commercial business manager, Ford Commercial Truck Sales and Marketing. “Passengers can get in and out of the vehicle so much easier than they can with other taxi vehicles out there,” said Cannons. “In fact, the spaciousness of the Transit Connect Taxi is a huge factor – if not the deciding factor – for many considering adding it to their fleet.”