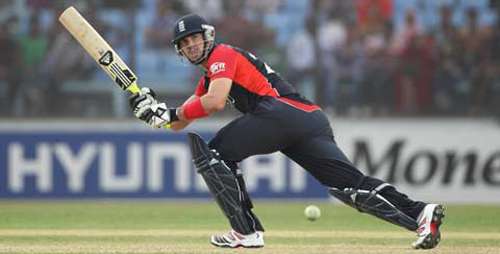 Keeping with its global philosophy to plant its name firmly in front of sports fans, Hyundai is sponsoring the ICC Cricket World Cup 2011 in India, one of the world's strongest emerging auto markets.
Advertisement

Under this agreement, ICC officials, players and VIP guests will use Hyundai cars for official transportation for the entire duration of the ICC Cricket World Cup 2011 and the contract extends till 2015. In addition to the World Cup, Hyundai will also be transport partners for the Women’s World Cup and the T20 championship. The fleet includes the best-selling i10, the luxurious SUV Santa Fe, the powerful Verna Transform and the international favourite - the Sonata Transform.

The sponsorship of the ICC Cricket World Cup 2011 by Hyundai follows on the heels of its sponsorship of two prominent sporting events in the United States: the Hyundai Sun Bowl in El Paso and the PGA Tour's Hyundai Tournament of Champions (the tour's first tournament of the year) in Hawaii.

What the PGA sponsorship meant from a pure marketing standpoint is Hyundai is willing to do head-to-head with brands like Mercedes, Lexus, and BMW who all sponsor significant golf tournaments around the world. This tournament sponsorship directly puts Hyundai in front of affluent golf fans at the tournament, which is only open to champions from the previous PGA Tour season. Also, the Hyundai name will be repeated an almost infinite amount of times during broadcasts on the Golf Channel during four days of coverage (not to be mention in sportscasts.)

You're also going to see Hyundai all over the place when it comes to soccer (or football as the rest of the rational world calls it). Hyundai has inked a deal with the world soccer governing body, FIFA, to an unprecedented long-term commitment for sponsoring the FIFA World Cup in 2018 and 2022 as the official automotive partner.

Just like it did at the FIFA World Cup in South Africa in 2010, Hyundai India will conduct activities like “Hyundai Fan Park” where its customers can get together and watch the matches live on large screen TV and also in the process enjoy refreshments and win tickets for the matches to generate excitement. It's also a great way for Hyundai to get its name out in front of potential customers.

By the way, curious what cricket is? At its simplest definition, it is a bat and ball game that originated in England. It is most popular in the former colonies of the British Empire (those dating from the 19th century on that is). It is most feverishly followed in countries like India, Pakistan, Australia, England, Sri Lanka, Bangladesh, South Africa, New Zealand, Zimbabwe and the West Indies.

HMIL’s fully integrated state-of-the-art manufacturing plant near Chennai boasts of the most advanced production, quality and testing capabilities in the country. To cater to rising demand, HMIL commissioned its second plant in February 2008, which produces an additional 300,000 units per year, raising HMIL’s total production capacity to 600,000 units per year.

Hyundai in India currently exports cars to more than 115 countries across the European Union, Africa, Middle East, Latin America and Asia Pacific. It has been the number one exporter of passenger cars from India for the sixth year in a row.

Hyundai's dominance in India puts it in a good position going forward to capture customers in the what is considered the second fastest automotive market behind only China. India has more than 1.18 billion people yet its buying power nowhere near comes close to matching its population figures. As of 2009, there were approximately 40 million passenger vehicles on the road, representing less than 4% of the population.

That number, though, is expected to grow exponentially in less than 40 years' time. According to the Society of Indian Automobile Manufacturers, annual car sales are projected to increase up to 5 million vehicles by 2015 and more than 9 million by 2020. By 2050, the country is expected to top the world in car volumes with approximately 611 million vehicles on the nation's roads.

Kind of makes sense that Hyundai is sponsor of the Cricket World Cup in 2011 in India. It's just laying the groundwork to be a dominant player in one of the dominant automotive markets in the world.