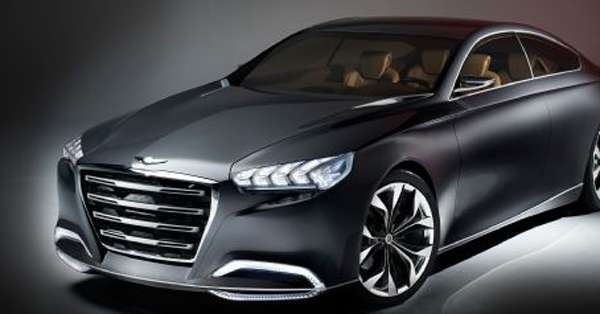 Hyundai might be just two short years away from introducing a third luxury car to its lineup. That moves the company one step closer to becoming a more upscale brand not focused on quite as much on its value products.
Advertisement

According to Automotive News, "Dave Zuchowski, CEO of Hyundai Motor America, said the Korean brand may have room for a premium model to join its Equus and Genesis sedans. 'That's one of the conversations,' he said. "I think it's fair to say that within a couple of years there may be another premium nameplate. 'That's a space where we think there's some opportunity.'"

The article said the third model is internally called the RK. (Maybe they could call it the RK900 – just kidding.) It sounds like it would be more a near-luxury model because it's slated to compete against the BMW 3 series or maybe it's going to take on the BMW 4 series, which itself is now both a two-door and four-door model.

The upcoming RK could then be more like the Genesis model, which has two variants: the four-door sedan and the two-door coupe. Both are sporty in their own ways but the 2015 Genesis sedan is moving more upscale, pitting it firmly against the BMW 5 series sedan. Expect it to be better frankly by most metrics.

An earlier MotorTrend.com article, also citing Automotive News, said, "The rear-drive compact sedan would be somewhat larger than the 3 Series, and also sport styling cues from the Genesis Coupe. That car's driving characteristics and turbocharged 2.0-liter I-4 might also be shared with the upcoming Hyundai sedan, though engine details are unknown. Another possibility suggested is the direct-injected 3.3-liter V-6 used in the Azera.

If styling is derived from the HCD-14, expect to see that concept's fastback roofline and short overhang to appear on Hyundai's 3 Series competitor. Whether the HCD-14's polarizing front end, with its large, Audi-like grille and segmented LED headlights, will make it to production remains to be seen."