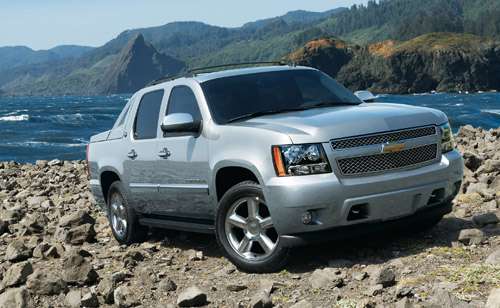 Friday the 13th has proven unlucky for the Chevrolet Avalanche, which ceases production and gets saddled with a morbid trim name.
Advertisement

Chevrolet is going out with a bang in the truck's last year. Well, maybe not so much a bang as a last gasp at relevance for the pickup that had a quick start but has been overshadowed by GM's own GMC division. It offers much better pickups than the Avalanche.

To clear out inventory, Chevrolet is introducing the Black Diamond Avalanche. Chevy says it will feature body-colored bed surrounds, a unique badge on the sail panel, additional features on LS and LT models, and lower prices across the lineup.

The last five words of the paragraph are what one needs to focus on: lower prices across the lineup. OEMs don't lower the prices of vehicles are selling well. However, they do put lipstick on the pigs that aren't selling well.

By the way, who came up with the name? I'm not much of a skier but doesn't avalanche and black diamond (the hardest ski trails) often mean certain death or dismemberment? Do the Chevy marketing folks have a morbid sense of humor? If so, more power to them.

Want to see something really interesting? Edmunds.com has dueling opinions on the Avalanche. Here is the opinion that was part of the official GM press release: “The Chevrolet Avalanche was one of the earliest forays into re-inventing the traditional pickup truck," said Michelle Krebs, senior analyst, Edmunds.com. “It was a vehicle that maintained the traditional truck image and capability but was more versatile for the person buying it for personal use more than work – a lifestyle truck more than a work truck. Other variations on the theme from competitors followed the Avalanche's debut.”

Then, minutes after Chevrolet made its announcement, this statement from Edmunds.com arrived in media inboxes: "The average Chevy Avalanche currently sells for $45,198, which is remarkably -- and perhaps off-puttingly -- high for a pick-up truck. Avalanche sales volumes plummeted during the 2008 recession and never recovered despite high levels of incentives on its hood," commented Edmunds.com Senior Analyst Jessica Caldwell. "Some people might see the discontinuation of the model as an opportunity to get a great deal. In this case, though, bargain-hunters interested in pick-up trucks may instead want to consider a lightly used model, as this segment is one of the few in which used vehicle prices have been falling recently."

So, Edmunds.com liked the truck but it's telling you not to fall for the gussied up model. Get a used one. Skip the Black Diamond Avalanche edition.

Anyway, here are the details on what you can expect if you do buy new. For 2013, a rear camera, rear park assist, power adjustable pedals, fog lamps and remote start will be added as standard equipment on LS models, while LT models have added a standard rear camera. Base prices have been reduced $2,500 (after equipment adjustments) with the 2WD Avalanche LS now starting at $35,980, plus $995 dealer freight charge.

Here's the official word from the man who knows the Avalanche best: “Although Avalanche sales have tapered off in recent years, as crew cabs have grown to dominate Silverado sales, we know there are many Avalanche enthusiasts among Chevy customers,” said Mark Clawson, Avalanche marketing manager. “The Black Diamond Avalanche is our way of saying ‘Thank you’ and making it just a little more attractive to own one more Avalanche.”

So long Avalanche. It's too bad you ride off into the sunset with such an ironic trim level name and price reductions as your final honor.