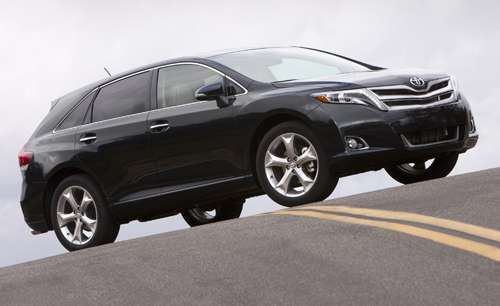 It is a bold statement to make, but at least from this perspective, the Toyota Venza is the best overall crossover on the market and pricing has been announced for the 2013 model.
Advertisement

Why is the Toyota Venza the best crossover on the market? Simply put, it does everything right from the outside to the inside. Is it the fastest crossover? Nope. Does it hug the corners the best? Nope. Is it the most luxurious? Nope.

The thing is it doesn't disappoint in any area. No sacrifices are made in one area to the benefit of the other. That's what makes it the best overall crossover.

The 2013 Toyota Venza begins arriving in dealers before June 1. The 2013 Venza is available in LE, XLE and Limited grades. The LE and XLE models are available with all powertrain combinations: four-cylinder, V6, front-wheel drive (FWD) or all-wheel drive (AWD); the Venza Limited is powered by the V6 engine only, in front-wheel drive or all-wheel drive configurations. Both engines are teamed with a six-speed sequential-shift electronically controlled automatic transmission with intelligence (ECT-i).

The MSRP for the 2013 Venza does not include the delivery, processing and handling (DPH) fee of $810. The DPH fee for vehicles distributed by Southeast Toyota (SET) and Gulf States Toyota (GST) may vary.

Venza’s aerodynamic shape has been modified with a new upper and lower grille, fog lamps and rear taillights. The updated styling is complemented by a new 19-inch wheel design and three new exterior colors: Attitude Black, Cypress Pearl, and Cosmic Gray Mica. Venza is available in three interior colors: Ivory, Light Gray, and Black, which is new for 2013. Each color is offered in fabric on LE and leather on XLE and Limited.

The 2013 Venza now offers the Toyota Entune multimedia system. It supports engaging mobile apps, such as Bing, OpenTable, and movietickets.com, along with accessing useful travel-related services, such as live weather, traffic, fuel information (location and price), stocks, and sports. Toyota Entune has a large selection of music options available to a vehicle, including iHeartRadio’s 750+ stations, and Pandora’s personalized music service.

The best part about the Toyota Venza? It's made right here in the U.S. in Georgetown, Ky. That's only appropriate because the Venza was originally designed for the North American market.

Toyota's First EV Will Have a Name of BZ: Toyota BZ
First Videos From Inside The Boring Company's Las Vegas Loop
END_OF_DOCUMENT_TOKEN_TO_BE_REPLACED