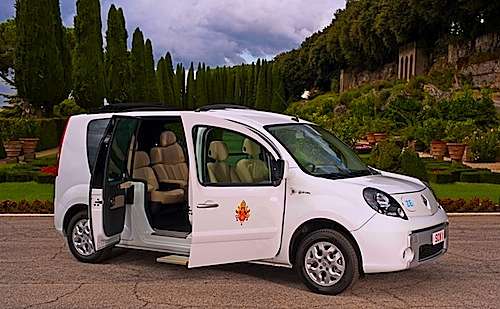 The Pope Gets An Electric Mobile

The Pope might be more known for his Popemobile but he will soon have to add to his collection an electric one. Renault will give the pontiff an electric vehicle.
Advertisement

Two Vatican EVs. So why would Renault give the Vatican electric cars? The answer is simple. The Renault Group's Chairman and Chief Executive Officer Carlos Ghosn presented the two electric cars at the Holy Father's summer residence in Castel Gandolfo. According to the company, the first vehicle will be used by the Pope’s chauffeur when traveling to his summer residence. The car comes in the obligatory white with the Papal coat of arms on its doors. The idea here is to show the ecological and sustainable push by the Vatican, a complete opposite of previous versions of the Popemobile. Remember the Popemobiles are fortified and with their added weight and features, usually commend hefty gasoline consumption. Needless to say, the Nissan-Renault strategic alliance gets its fair share of positive news here also.

The Kangoo Maxi Z.E. used is powered by a 44kW, or 60hp electric motor fed by a lithium-ion battery pack, which should give an average European combined-cycle range of about 105 miles. The other vehicle is very similar to the first one, adding a blue livery with a white and yellow stripe along each flank for the Corps of Gendarmerie of Vatican City for the Pope's security.

Kangoos At The Vatican. The two electric vehicles will sport the usual amenities, with the seating of up to four people, fitted with two particularly comfortable separate seats at the rear. They both have an opening roof, removable rear side windows, hinged rear side doors, as well as electrically folding door steps to facilitate in and out traffic.

The two electric vehicles will be the first time the Vatican welcomes alternative energy into its city and His Holiness Benedict XVI will be the first papal beneficiary. According to the Vatican, the Pope is recognized as being particularly sensitive to environmental issues. He has frequently underlined the urgent need for sustainable development to safeguard Creation. Will the so-called religious politicians now heed the Pope’s message? That remains to be seen.

Nonetheless, this is one step in the right direction with the Vatican officially traveling the Pope in a Renault Kangoo Z.E. electric vehicle, EV.