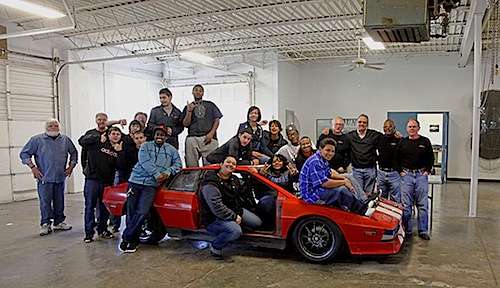 Kansas City’s High School and the MINDDRIVE Program is building an electric car by its students to do a coast-to-coast demonstration run.
Advertisement

The “Electrifying Education Coast-To-Coast” run will begins June 11 in San Diego, California and end on June 22 in Jacksonville, Florida after a coast to coast run. The MINDDRIVE is a Kansas City non-profit organization that wants to bring experiential learning techniques and a hands-on project for urban high school students. The idea is to build an electric vehicle designed for a coast-to-coast demonstration run beginning in mid-June.

Linda Buchner, Co-Founder of MINDDRIVE says that: “Kansas City isn’t the only city in America where students are slipping through the cracks in the educational system because of socio-economic factors beyond their own control,” “It’s an issue in many cities and small towns across the country. We want to show that there is hope for these students by using a different learning model to reach them.”

Students give presentations and answer questions about their design, fabrication, and documented design process of the car. They will explain their collaboration during the re-charging stops in each city. The coast to coast trip will go from San Diego, Tucson, El Paso, San Antonio, Houston, Baton Rouge, Mobile, Tallahassee and Jacksonville following Interstate 10.

Steve Rees, Co-Founder and CEO of MINDDRIVE said, “This project will be an illustration of how with a nationwide charging grid and quick-charging technology an electric car could be viewed as much more than an “urban car” by all types of individuals and families who are wanting an alternative fuel-powered car.”

The “Electrifying Education Coast To Coast” is converting none other than a 1977 Lotus Esprit, a smart move. The project has been working closely with major companies such as; Bridgestone Americas, America’s Drive-In, Automobile Dealers Association of Greater Kansas City, as well as other generous groups. The project is always looking for new sponsors.

The trip also aims to create a fundraising effort to help individuals and interested organizations become partners in this unique journey. You can follow along the way by visiting the MindDrive website and click on the “live” link that will track the effort GPS.

It’s great to see such efforts that have positive benefits. Children at risk can learn a new trade that will be a growing part of their future, working on electric and hybrid cars. It also shows that electric cars have come a long way and can now travel coast to coast, as they have done for a few years now. It’s great to see MindDrive engage these students by building an electric car and seeing their very own results come to fruition.