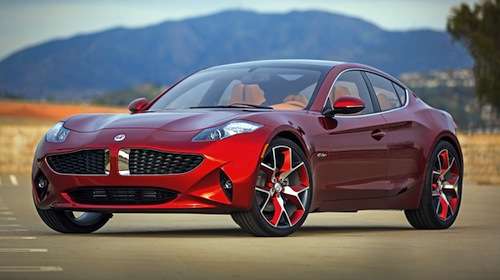 Fisker Brings in The Big Guns From Other Carmakers

Ever wondered if Fisker Automotive will survive in the long run? The latest appointment shows the company is serious about its future by bringing in more seasoned automobile veterans.
Advertisement

From Ford To Fisker. Fisker Automotive, the company responsible for the stunning luxury Electric Vehicles “with extended range”, EVer™ Fisker Karma, OK let’s call it a plug-in hybrid to make it easier, is pleased to announce the appointment of Jim Yost as Chief Financial Officer, CFO. The reason why this is a big deal is that you might recognize Jim’s name in the industry. He is after all a well-known automotive industry financial executive with more than 30 years of global experience. Jim Yost’s most recent automobile stint was as Executive Vice President, Chief Financial Officer of Dana Holdings from 2008 through May 2012. But you might remember him best if you’re a Ford fan.

Jim Yost began his career at Ford Motor Company and over the course of his 27 years there served in several senior and executive level finance roles in North America, Europe and South America. His wide experience in the industry included serving as Ford’s Chief Information Officer and Vice President of Corporate Strategy, something Fisker Automotive will be eager to put to good use. Shortly after retiring from Ford in 2001, Yost joined Hayes Lemmerz, and served as an Executive Vice-President, EVP, and Chief Financial Officer from 2002 through 2008.

As far as what CEO Tom LaSorda has to say about the big news: “We are delighted to add a high caliber global automotive executive like Jim to the Fisker leadership team,”. “Jim’s extensive financial, operational and strategic skills as well as international experience will be a tremendous asset as we continue to expand the global reach of the Karma sedan and prepare the path for the next generation Atlantic sedan.”

Making Sense Of This Move. When you put it in perspective, for a startup in the very tough world of automobile that saw its birth in 2007, attracting a high calibers as Jim Yost and LaSorda is very revealing about what Henrik Fisker has in mind. Yost comes in on the heel of hiring the company’s new CEO LaSorda in February and replaces Joe DaMour, who will remain a special adviser to the company. LaSorda, who was CEO at the Chrysler Group LLC and Yost shows Fisker is taking the controversial route of bringing in automobile veterans to beef up its operations in this new field of plug-in hybrids and hopefully soon pure electric vehicles.

As for the future of Fisker Automobile, the addition of these two seasoned veterans, Jim Yost and Tom LaSorda should at the very least reassure those sensitive investors.

Tesla Giga Berlin's New Hurdle: It's Not Only the Gov't, but Now Tesla Itself
Teslas Are Sold Out Until 2023, But The Timing May Reverse
END_OF_DOCUMENT_TOKEN_TO_BE_REPLACED