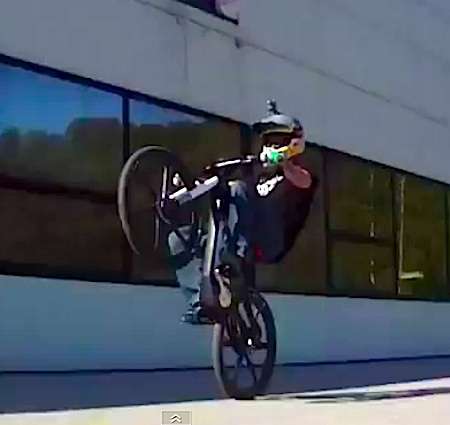 One might remember the German EH Line article written last month*, well here’s another German eBike and none other than Audi is behind it.
Advertisement

So let's get this straight. Audi buys Ducati and comes out with an electric bicycle? Why not. Audi leaked… or is it teased us with its new electric bicycle with a short video showing French freestyle trial rider Julien Dupont riding it. I’m game, I’ll try also.

A High-Tech eBike. When we think of eBikes, we think of a regular bicycle with a mildly assisted electric motor. If we go a step above, we get a nicer, lighter bike with a beefier battery pack and an electric motor. But Audi being Audi wouldn’t just do a regular eBike. The company has to represent that certain German savoir faire by using as much technology as it cram into a vehicle with good results. This electric bicycle sports serious weight reducing materials such as a carbon fiber front and rear suspension, and as far as we can tell, the frame is also made out of carbon fiber. This is not your average commuter bike, this is a pro’s bike.

Dupont goes on the record saying this bike has a lot of power, and coming from a trial motorcycle guy, that is very high praise. Watch the video below and see how the bike effortlessly does donuts. And why does Dupont feel so at ease and at home on this bike? It might help the bike has a twist throttle, much as a motorcycle does.

So a few thoughts pop to mind at this stage. Did Audi use any of its newly bought Ducati technology into this electric bike? Remember that some Italian companies had worked on an electric bike concept last year or so. And as to the other burning question how much? You can bet it will reflect the state of its highly advanced technology. After all, it’s an Audi.

The other thing we can look forward to is the escalated race from manufacturers who will rush, or not to deliver eBikes. Lotus made some fine frames in the past. It wouldn’t be too much of a stretch to see them do what Tesla Motorsports did to its Elise. This is something the Lotus Engineering Company could do easily. How about a Ferrari or Porsche eBike anyone? As more and more startup and more establish bicycle makers dabble with electric bikes, it wouldn’t surprise us to see more eBikes coming out. If eBikes have a very limited market, usually for city, the off-road crowd could help bring it into the limelight.

Are we witnessing the beginning of a new sport, such as the electric bike extreme sport? It certainly seems that way. It won’t take long before a flock of restless, adrenaline seeking younger generation finds all sorts of ways to torture these bikes and push gravity to the extreme. All in all, the world of electric assisted bicycles is just starting to sharpen their teeth and if car manufacturers such as Audi come onboard, then you can be sure we will witness also a lot of choice in this segment.

DrDale wrote on June 30, 2012 - 2:59pm Permalink
This is very exciting! Although someone said this is a pro bike, not a consumer bike, racing has always led the way to greater functionality for the everyday user. And the beautiful thing about this is that the bicycle is an established form-factor, well entrenched in society and much more likely to gain wide enthusiasm than the Segway. And since it goes faster, it will also allow longer commutes, etc. Saving the planet for human habitation by getting rid of oil-burners just got much more possible!!
Nicolas Zart wrote on June 30, 2012 - 7:24pm Permalink
You're right, it is not your everyday consumer bike. As far as ridding the planet of oil burners, that will take some time but it is an inevitability. Thanks for your comment, Nicolas

Toyota vs Tesla: Which Stock To Buy These Days
For Some Former Daimler Managers Daimler Is Authority, While Tesla Is Like a Startup
END_OF_DOCUMENT_TOKEN_TO_BE_REPLACED