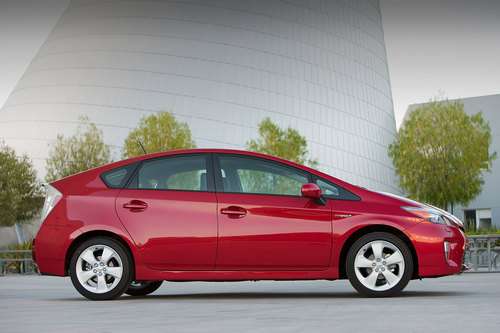 Toyota announces the price of the 2012 Prius Liftback

The 2012 Toyota Prius Liftback received updates and enhancements, and a slightly higher MSRP, reflecting a price increase ranging from 2.0 percent to 4.3 percent.
Advertisement

Toyota's Prius lineup now includes four models, the venerable Prius (a.k.a. Prius Liftback), and three new models being introduced this model year, the Prius v, the Prius c, and the Prius Plug-in Hybrid. Today pricing and other details were announced concerning the Prius.

The 2012 model year is still the GenIII Prius, with a few improvements. The biggest of which is Toyota's ENTUNE suite of connectivity features, available in the Prius Three, Four and Five models. The infotainment package in the Three, Four and Five models includes ENTUNE, an integrated backup camera display, SiriusXM Satellite Radio, voice recognition, and more. The Prius Five model includes a premium navigation system, heads-up display, cruise control, the "Pre-Collision System", and the "Lane Keep Assist". The Pre-Collision System prepares the vehicle when it detects a collision is imminent, and the Lane Keep Assist feature helps the driver stay within the lane.

The Prius Liftback is Toyota's famous hybrid car that gets over 50 miles/gallon fuel efficiency. It is the most fuel-efficient gasoline-powered passenger car available in the U.S. today. Over one million Prii have been sold since 2000.

The 2012 Prius is certified as a Super Ultra Low Emission Vehicle (SULEV) and an Advanced Technology Partial Zero Emissions Vehicle (AT-PZEV). It is what Toyota calls a "full" hybrid, which means Prius owners are still 100% beholden to using gasoline. Only their Prius Plug-in allows the owner to avoid burning gasoline, because the plug-in feature allows for some miles to be driven using electricity from the grid.