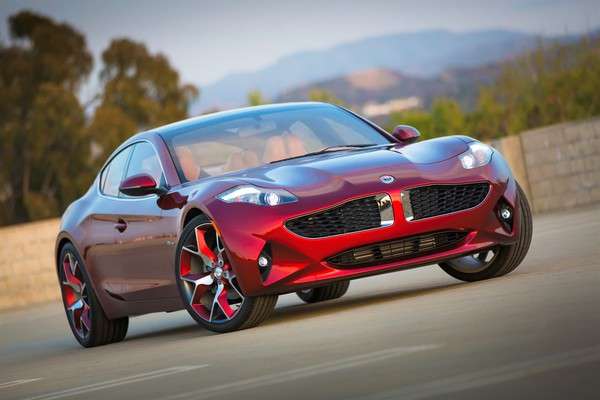 The Department of Energy has reportedly sold its loans to Fisker Automotive to a Chinese investor group led by the son of Asia's richest man, and who was already an investor.
Advertisement

According to news reports, a Chinese investor group led by Richard Li has bought out the Department of Energy loan to Fisker Automotive. The DoE guaranteed the company $528 million in loans from the $25 billion Advanced Vehicle Technology Manufacturing loan program, but the company only drew $192 million of that amount before their loans were frozen in early 2012. That was merely one step of a very difficult year, 2012, in Fisker's history, a year that brought the company to its knees, with sales dried up, all but a handful of employees laid off, and the company actively seeking buyers for most of 2013.

In September 2013, the Dept. of Energy announced it would hold an auction of the loan to Fisker Automotive. Of the $192 million loaned to Fisker, the DoE was able to recoup $28 million, leaving an outstanding balance of $168 million of loans. At the time Peter W. Davidson, executive director of the Energy Department’s loan program office, said “After exhausting any realistic possibility for a sale that might have protected our entire investment, the department announced today that we are auctioning the remainder of Fisker’s loan obligation, offering the best possible recovery for the taxpayer.”

The winner of the loan will be in the drivers seat for determining Fisker's future. The DoE is requiring certain commitments from the winner of the auction, with Davidson saying last month "The department will require all bids to include a commitment and business plan that promotes domestic manufacturing capabilities and related engineering for advanced technology vehicles here in the United States."

In other words, while it appears a Chinese investor group has won the auction, the Dept of Energy is requiring Fisker's rebirth to occur in the U.S. in both design and manufacturing.

According to a Reuters report the winner of the auction is Richard Li's investor group. The sale has not been finalized, and the parties are hammering out details. Li is the son of Asia's richest man. His group beat out at least two other investors, German investment group Fritz Nols AG, and a team that included Chinese auto parts supplier Wanxiang and former General Motors Co executive Bob Lutz.

Wanxiang bought A123 Systems last Winter out of bankruptcy. Because A123 Systems is Fisker's battery supplier, any new owner of Fisker Automotive has to strike a deal with A123 for battery supplies, or else redesign the car to use a different battery pack.

Among Fisker Automotive's assets is a former GM factory in Delaware that was to be the manufacturing plant for the Fisker Atlantic and other cars. If, indeed, the winner of the loan is being held to the requirement for "domestic manufacturing capabilities" then it's likely that factory will be reopened for Fisker's manufacturing needs. However a report on delawareonline.com quotes a spokesperson for Delaware Gov. Jack Markell saying “We continue to monitor developments regarding Fisker, but right now we have no confirmation of information about the auction. The Governor hopes that whoever emerges from the auction for the Fisker loan has a vision for the company that involves use of Boxwood Road and the many excellent craftsmen who once worked there.”

The same report quotes Delaware officials saying that if the auction falls through, or that otherwise the Federal Government is left holding the former GM factory, that Delaware will petition to have ownership transferred to them. Delaware is looking to this factory for significant jobs growth in the state, and had provided a few million dollars of grants to Fisker in addition to the Dept. of Energy loans.

Tesla Contemplates A New Strategy for China Retail even As Sales Boom
Jay Leno on Elon Musk & EVs: “I Think He Should Get ... Credit"
END_OF_DOCUMENT_TOKEN_TO_BE_REPLACED