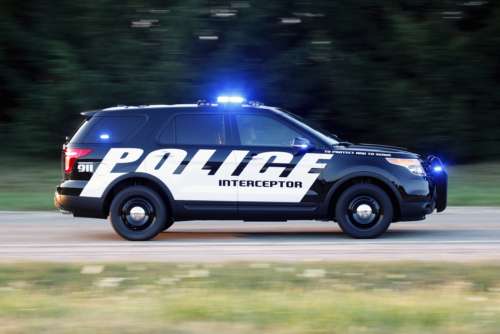 Ever since Ford retired the venerable Crown Victoria and introduced its new generation of police cars, its Police Interceptor vehicles have been popping up everywhere. First Ford took advantage of its NASCAR sponsorship to use them as the designated pace cars at the Ford Championship Weekend held November 18-20 at Homestead Miami Speedway. Now they’re showing up at the opposite end of the country, at the police vehicle tests conducted by the LA County Sheriff’s Department (LASD).

The LASD runs the tests annually, in conjunction with the LA Police Department, to evaluate the pursuit performance of police vehicles. That’s one competition I’d love to watch. In order to test for brake and tire durability, powertrain robustness, and driveability with high vehicle temperature—all factors in police work, the cars are driven for 32 high-speed pursuit laps. Both of Ford’s new Police Interceptors, the utility vehicle and the sedan, outdid the competition in high-speed pursuit, city pursuit, acceleration and braking.

Ford says they used the Crown Victoria as a benchmark for their purpose-built Police Interceptor vehicles, and bettered it. “Our experience with the Crown Victoria helped us develop the next generation of Police Interceptor vehicles that serve as tools for the law enforcement community to do their jobs safely, efficiently and effectively,” said Lisa Teed, Ford marketing manager for the Police Interceptor products. “The LASD testing proves the durability of Ford’s latest generation of police vehicles.” The new vehicles have better performance, handling and mileage.

The 3.5-liter Ti-VCT equipped sedans shone in the city pursuit test, which involved short straights and quick turns, designed to test a vehicle’s driving dynamics in urban environments. The utility versions of the Police Interceptor also did well. The all-wheel-drive utility was faster than its competitors on the lap test, and braked better, too, with a stopping distance eight feet shorter than its competitors.

Ford’s new Police Interceptor vehicles will be produced at their plant in Chicago, which must be welcome news to workers there. They were designed with the help of Ford’s Police Advisory Board, a group of law enforcement officers from the US and Canada. Ford says they have “the same durability and price range as the popular Crown Victoria,” which is presumably good news to police departments on a budget. They can be ordered now, but only by police departments and other law enforcement agencies. Pity, that.