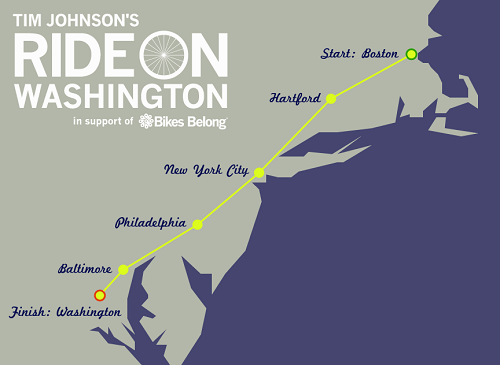 Volkswagen has announced a a two-year partnership with Tim Johnson, a professional American cycling legend, which starts with the second “Ride on Washington” bike ride.
Advertisement

The German automaker will roll out this sponsorship by supporting Johnson as he rides from Boston to Washington DC later this month for the National Bike Summit. The bicycle trek Johnson will be embarking on is roughly 530-miles.

Johnson, who lives and trains in New England, will lead a special group of cyclists on his second Ride on Washington to raise funds and awareness for the Bikes Belong Foundation. The foundation focuses on safety projects and children's bicycling programs.

This “bike ride for more bike rides” will be departing from Boston on March 16. During this 530-mile bicycle journey, riders will stop in Hartford, New York City, Philadelphia, and Baltimore to meet with leaders of each cycling community before arriving in Washington D.C. on March 20. (That is 132 miles of bike riding per day. You better be in good shape to do this ride!)

“This is a perfect way for Volkswagen to launch its support of Tim Johnson and the entire American cycling community,” said Jonathan Browning, President and CEO of Volkswagen Group America. “We see what Tim is doing, not just working to win races but also to help foster better cycling conditions in America. It mirrors how Volkswagen sees integrated transport developing in the future.”

Volkswagen also recently announced a partnership with Bikes Belong and USA Cycling, as well as several event sponsorships including support for the Sea Otter Classic in California.

Johnson has had quite an impressive bicycling career. He is a six-time national cyclo-cross champion and one of the only cyclists to represent the United States at the World Championships for road racing, MTB and cyclo-cross. In 2010, Johnson opened a new chapter in his cycling career when he attended the National Bike Summit, where the leadership of non-competitive cycling gathers to lobby Congress to support bike-friendly initiatives."

“The people I met there were every bit as impressive as professional cyclists,” said Johnson. Johnson originally threw together the first ride in about six weeks and raised about $25,000 for Bikes Belong with friends. “This year we’re riding again but with 20 of us looking to raise $100,000 to support such initiatives.” he commented.

The ride will bring together advocates, industry leaders, and racing clubs at nightly receptions in each host city in an effort to raise local awareness about national bike initiatives. The event also aims to create discussion and attention around the social and health benefits of bicycling. This year’s summit is especially critical as lawmakers are debating a transportation bill that would eliminate most federal funding for bicycle facilities, due to the difficult economy.

“What Tim is doing is amazing,” said Bruno Maier, vice president of Bikes Belong. “This ride and his efforts are activating thousands of cyclists who knew little about how a bike path got built or a bike lane got painted.”

Local riders from different cities will come out to escort the ride as it departs or arrives. This year, the organizers are hoping to invite cyclists to join them for the final leg from Baltimore to Washington. The Capital Bike Share system is also putting extra bikes in its system to facilitate casual riders who simply wish to show their support for bikes in the final five miles of the ride.

“The last five miles is for everybody who believes bikes are a simple and effective solution for a lot of our country’s problems,” said Johnson. “This is the no-Spandex portion of the event! Whether you are age 8 or age 80, we want you to come out and join us.”

I bet not too many people want to do a bike ride that is 530 miles, but you can still show your support for bike initiatives by visiting: www.rideonwashington.org.

Panasonic Updates Profit Forecast, Noting How Much Tesla Batteries Help The Jump
2022 Porsche 911 GT3 Laps Nurburgring in 7:04 With Journalist Behind The Wheel
END_OF_DOCUMENT_TOKEN_TO_BE_REPLACED