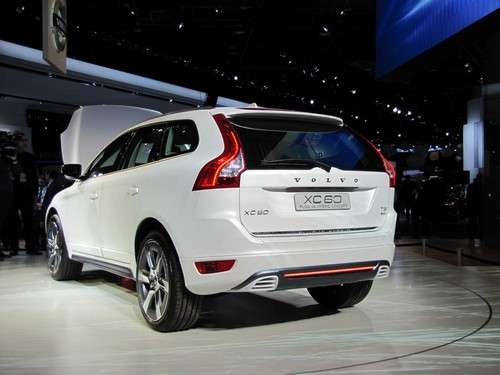 At the 2012 North American International Auto Show in Detroit, Volvo showcased it's Volvo XC60 Plug-in Hybrid concept. It seems to be a well rounded vehicle as far as we can tell. However the real question remains, when will Volvo bring the XC60 Plug-in Hybrid Concept to the US market?
Advertisement

The Volvo XC60 Plug-in Hybrid Concept is an electric car, a highly economical hybrid and a powerful high-performance car all rolled into one. The driver can choose, with a touch of a button, whether they want their XC60 to be utilizing the gasoline or electric motor.

"The technology in the XC60 Plug-in Hybrid Concept is as ingenious as it is unique," says Stefan Jacoby, President and CEO of Volvo Car Corporation.  "You can make really green progress on the road without compromising on any of the luxury car's renowned properties. No other manufacturer has succeeded in delivering fuel economy and electrical range on this level in a capable, spacious performance car with 350 horsepower on tap."

The XC60 will come in three different driving modes for various driving situations;

The XC60 Plug-in Hybrid Concept will be powered by a four-cylinder turbocharged gasoline engine. Mated to the engine will be a new eight eight-speed automatic transmission. The engine is part of Volvo's new VEA VEA (Volvo Environmental Architecture) engine family. These new Volvo engines aim to be 35 percent more efficient than the previous generation.

The concept XC60 on display at Detroit carried a "T8" badge, supposedly meaning a high-performance Volvo. The Swedish company is trying to showcase that the combined gas and electric horsepower is 350hp, pushing into eight-cylinder engine range. Of course I doubt you would truly feel the true guts of an eight-cylinder in this XC60 Plug-in Hybrid concept.

One interesting note is the XC60 Plug-in Hybrid concept has a special alternator and starter. An Integrated Starter motor and Generator (ISG) connected to the crankshaft, which is located between the engine and the transmission. The ISG is capable of delivering an extra 34 kW (45 hp) during acceleration. It also charges the battery during braking.

The XC60 Plug-in Hybrid will come supplied with power from a 12 kWh lithium-ion battery pack installed under the floor of the load compartment. The battery can be recharged via a power outlet at hoe or a parking space. Recharging time will vary with the type of outlet. If a 220V is available a full charge with 12A takes just 3.5 hours. A standard 110V/12A to get a full charge will take 7.5 hours.

The neat feature with the XC60 Plug-in Hybrid is that you can save your battery power for later. When the “Save” feature is activated, the generator charges and tops up the battery pack if necessary. The aim is to ensure sufficient battery power for about 12 miles of driving on electricity.

Also activating the AWD (All Wheel Drive) is easy as pushing a button. The XC60 Plug-in Hybrid's AWD electric four-wheel drive system has been designed to provide better traction when starting and when driving on slippery roads, for instance in snow or mud.

The Volvo XC60 Plug-in Hybrid Concept on the outside, looks virtually identical to the regular XC60. There are a few special touches such as the white color and the 21-inch wheels enhance the muscular appearance. The interior features unique detailing and colors, such as sober dark-blue leather upholstery and inlays of blue-grey wood. Also the instruments have been tailored to give the driver all the necessary information about petrol and electricity consumption, battery charge level, remaining range and so on.

When and if this will be available in the US? What is the price range? Volvo has not released much details on that, but the VEA engines will appear on 2013 models.

It seems that there is a definite market for Soccer Moms and Dads that want a fuel-efficient SUV. Volvo is a relatively small market for the US, so it may not be a priority. As well it seems that Volvo is not qutie ready to bring this to market, as it got into the Hybrid game a little late. I guess it is better to be late to the party, then not show up. It will be interesting to see what Volvo decides to do with this concept and when we are likely to see more Volvo Hybrids.

Toyota's First EV Will Have a Name of BZ: Toyota BZ
First Videos From Inside The Boring Company's Las Vegas Loop
END_OF_DOCUMENT_TOKEN_TO_BE_REPLACED