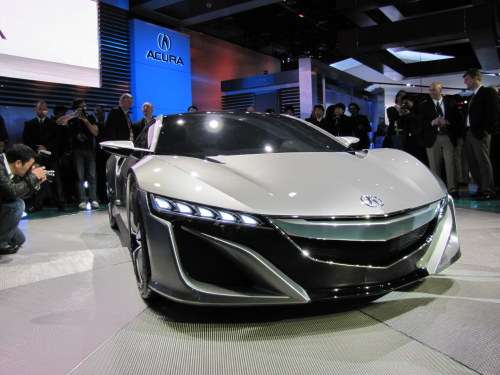 Acura has been teasing then denying a replacement for the Acura NSX which ended its 15 year reign in 2005. Now it’s back, finally. It is more than a concept, though, as production may arrive within 3 years. Question is, how much?
Advertisement

Of all the many crowded Press Preview events at the NAIAS 2012, the Acura NSX concept reveal had to be for me, not only one of the most crowded but drew more outward excitement from the media than I had anticipated.

Frankly, I gave up going for the hoopla event, and decided to get the aftermath vision so as to take my own photos and videos in a quieter arrangement. Even that was a real challenge.

Comments among the crowd were varied but highly positive. One wondered and hoped Acura was not stupid enough to charge some ridiculous price like the Lexus LFA for $375,000.

Another felt the front kind looked like an Audi R8 and may be overdone with that V-front fascia. Still, the gentleman felt this may be the best car that Honda has ever designed.

Regarding a price benchmark, read my article on the Falcon F7: Falcon F7 makes supercar impression at NAIAS 2012

Although it was not clear I hinted in my video comment that the Acura NSX Concept is indeed an all-wheel-drive hybrid, clearly making the Acura NSX much different than your average supercar.

For the record, it is still mid-engine, but unlike the first NSX which had a moderately powerful transversely-mounted V-6, this new vehicle will have much greater performance capability via an improved electrically-driven front axle and a 7-speed twin-clutch transmission.

Now here is my video without the pizzazz of music and fanfare, but plenty of Press Preview crowd interaction. My still photo gallery is located below the main photo above.

Aside from my own video, here’s one I pulled from You Tube of the actual reveal.