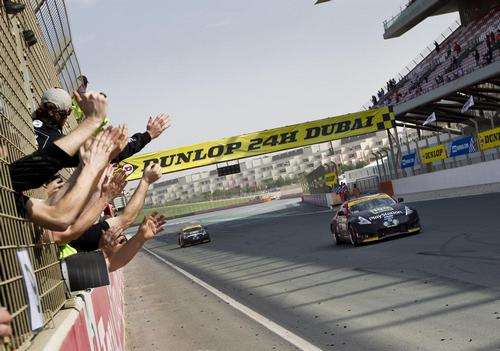 The Nissan 370Z took a podium finish at the Dunlop 24 Hours of Dubai this afternoon. The four drivers and team-mates who drove the Nissan 370Z all had one thing in common, all were video gamers and have won the Gran Turismo Academy.
Advertisement

For those that don't know, the Gran Tuismo (GT) Academy is a competition where fans and players of the popular video game series, compete for a chance to get real race car driving training from professionals. There are 16 finalists that are chosen, who then compete for the chance at a shot at a real racing career. The program, which is run by Sony and Nissan, has been going on for several years. The GT Academy has produced some fine drivers, such as Lucas Ordonez, who was the first person to win GT Academy.

The four drivers who competed in the 24 Hours of Dubai were, Jann Mardenborough, Bryan Heitkotter, Lucas Ordonez and Jordan Tresson. All have won the GT Academy during the past few years. (Ordonez won GT Acadmey in 2008, and Tresson won in 2010.)

The team secured a 3rd place finish in their class and finished 26th overall in the race. Mardenborough took the checkered flag for the team after 24 hours of grueling racing where. All of the gamers, or should we say drivers, showed they have true racing skills on and off the track. Most surprisingly there was not a hint of damage of the car, which is rare in endurance races.

“That was without doubt the best weekend of my life,” said Mardenborough.

“I’m so pleased that we got a good result in our first international 24 hour race,” added Bryan Heitkotter. “We’ve worked hard during the last six months to get to this point and I would say to anyone who wants this as much as I did that you can reach your goals if you focus on them and work hard.”

“We have really proved that GT Academy works as to get four gamers to a podium finish at this race is amazing. I am very impressed with my new teammates who have only been racing for six months. They came here and were fast, consistent and didn’t make any mistakes.” said Ordonez.

Upon winning the GT Academy in 2008, Ordonez started his international racing career in Dubai several years ago. So far his journey has taken him all the way to drive and compete in the world famous and renowned 24 Hours of Le Mans. He was able to secure a class podium finish in that race in the LMP2 class, which is quite impressive for a rookie driver.

“It was pretty tough in the car and 24 hours is a long time to have to hold it all together,” said second GT Academy winner, Jordan Tresson. “I want to say well done to Jann and Bryan who were still bedroom gamers just one year ago.”

“This is the first time that all four of my graduates have raced together so it is a special. moment for me,” said Bob Neville, boss of the RJN GT Academy team

Not bad for a couple of guys that went from “couch potatoes” to real race car drivers in a matter of a few months. Each had to spend an equal amount of time on the racetrack, meaning they raced for 6 hours each. Intense racing for these amateur drivers, but being able to secure a 3rd place finish shows that they were chosen well among all the participants in GT Academy.

If you have dreams of becoming a real race car driver, I guess I would go and start playing Gran Tursimo. Who knows, maybe you will be one of these guys someday. "Playing video games get you nowhere!" and “Video games are a waste of time!” clearly has never played Gran Turismo.