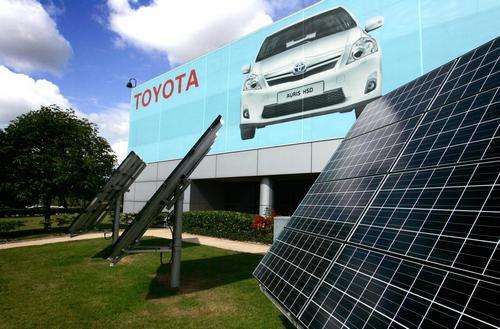 Toyota has won the 2011 Green Manufacturing Award, for the outstanding environmental achievements of its European operations. The award recognizes companies that show a commitment to environmental manufacturing.
Advertisement

Toyota's focus on creating environmentally friendly production in every aspect of its operations shows in its entire process from design to manufacturing of vehicles.

Toyota reduced the impact of each vehicle built in Europe by 40 percent in terms of energy use; 38 percent in waste produced; 51 percent in the emission of volatile organic compounds (VOCs); and 44 percent in water usage from 2001-2009. Toyota continues to create even better and more energy and waste reducing methods for manufacturing.

The Burnaston car plant in Derbyshire, in the UK, is one of Toyota's environmentally friendly plants. Burnaston leads the way in a cleaner, more efficient production process and harnesses the use of alternative energy sources. These alternative energy sources include a UK industry-first, switching on a vast solar panel array, capable of capturing up to 4.6 million kWh of energy every year. This is enough energy to build around 7,000 cars. In the UK, Toyota incinerates waste and significantly reduces the amount of energy and water required to manufacture each vehicle as well. Toyota's UK operations play a key role in the company's commitment to being eco-friendly.

Toyota was chosen as the winner of the award after judges looked at studies from all the short-listed companies. They analyzed performance on a variety of factors such as energy efficiency, water usage and treatment, compliance with environmental regulations and the reduction of waste from production processes. Toyota got praise from the judges on its approach to producing vehicles while keeping the environment in mind.

“This award recognizes the tremendous efforts by the members at all of our European Manufacturing facilities who continuously improve, and apply their knowledge of and expertise in the Toyota Production System to their daily activities.” said Steve Hope, Toyota’s General Manager of Plant Engineering and Safety, who accepted the award on behalf of Toyota.