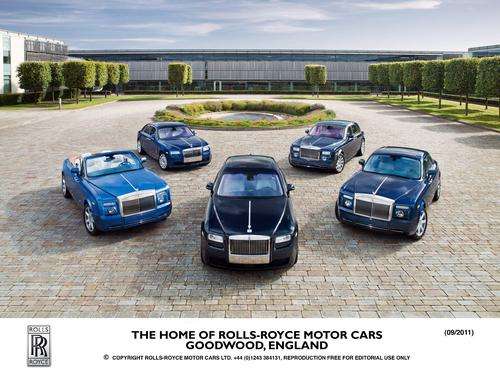 Rolls-Royce, the storied British automaker, revealed today they they delivered stunning sales in 2011. This reaffirms the company's position in the ultra luxury segment.
Advertisement

The company sold 3,538 cars worldwide during the year, a 31 percent increase on the 2010 total of 2,711 cars. The figure represents the best sales result in the company’s 107-year history; the previous record of 3,347 cars having been set in 1978 during the Silver Shadow II era.

Sales for Rolls-Royce were up across the world. In Asia sales were up 47%, in North America 17%, and the Middle East 23%. The UK reported a 30 percent growth in 2011.The best growth markets for Rolls-Royce is Germany, Russia, and Continental Europe were the largest growth more than doubling sales in 2010.

“We had an outstanding year in 2011 and we should take a moment to reflect on this Great British success story,” said Torsten Müller-Ötvös, Chief Executive Officer, Rolls-Royce Motor Cars. “Our business is in excellent shape. We are developing our dealer network, moving into new markets like South America, expanding our manufacturing operation in West Sussex to meet global demand and have plans to develop our product range. At the core of this extraordinary success is a dedicated, committed and, above all, passionate workforce.”

The company's vehicles have only two models. The uber-luxurious Phantom line, which includes the Phantom, Phantom Extended Wheelbase, Phantom Drophead Coupé and Phantom Coupé. As well as the new Ghost range of models, which was launched in April. Interest in the Ghost range accounted for the largest share of growth in 2011.

2011 also marked a record for the Rolls-Royce Bespoke program. This is a service which Rolls-Royce’s has built it's reputation upon. The legendary hand-craftsmanship and attention to detail at its core shows in nearly every Phantom family model leaving Goodwood, the home of Rolls-Royce. There are lots of bespoke personalization options to choose from such as, unique paint colors, interior detailing and embroidery, to exquisite whole vehicle designs including champagne sets, humidors and picnic sets.

Rolls-Royce has announced plans to expand its manufacturing plant at Goodwood. Over 1,000 people are employed at Goodwood. This will help the company meet further growth in worldwide sales and satisfy demand for highly personalized Ghost and Phantom models. Expansion work will begin in February of this year.

Tesla-Funded Research Reveals One of The Biggest Mysteries of EV Battery
Tesla Tesla Buyer Nets a Whopping $12,000 Discount After Asking for Reduction
END_OF_DOCUMENT_TOKEN_TO_BE_REPLACED