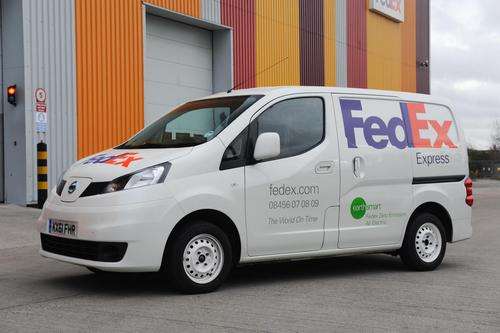 Nissan and FedEx, the mail delivery company, have teamed up to test a fleet of Nissan NV200's, which will be zero-emission all-electric vehicles (EV), on the streets of London. The fleet will be used to evaluate how the Nissan NV200 prototype electric vehicles perform in the daily grind of normal traffic.
Advertisement

Nissan will provide FedEx with Nissan NV200 EVs for making deliveries and pick-ups of packages around London for 2 months. This will allow Nissan to collect data on how the vans operate in real world driving. The Nissan NV200 uses the same EV powertrain and battery that is fitted to the Nissan Leaf.

The collaboration with FedEx represents Nissan's next step in breaking into the EV market., trying to make these car viable for commercial uses for companies like FedEx. The Japan Post Service already tested a fleet of Nissan NV200 prototypes for delivering and collecting packages. It is expected that Nissan will want to do additional trial tests in 2012.

“Zero-emission vehicles like Nissan LEAF are already playing an increasingly significant environmental role in our towns and cities. The Nissan NV200 EV prototype delivery vehicle will not only improve the quality of urban life, but thanks to best in class running costs has great potential to ease the economic burdens placed on companies,” said Nissan Corporate Vice President Hideto Murakami, responsible for the Global LCV Business Unit, “FedEx Express feedback from the evaluation process will help us tailor a future battery-powered light commercial Nissan vehicle that meets customer needs.”

FedEx already operates 43 EVs in many cities around the world such as London, Paris, New York, Los Angeles, Chicago and Memphis. All are ideal urban areas for using EVs, where they do particularly well.

The Nissan EV prototype is no exception since it has regenerative braking. It does not take as much energy to use an EV as a normal gas-powered car in stop-and-go city traffic.

“FedEx is proud to collaborate with Nissan on this initiative. Our cross-sector approach to reduce dependence on petroleum, reduce carbon impact and eliminate tailpipe emissions remains unwavering. At FedEx, we seek to connect the world in responsible and resourceful ways and we will continue to work closely with Nissan to change what is possible.” said Beth Galetti, vice president of Planning and Engineering, FedEx Express EMEA (Europe, Middle East, Indian Subcontinent & Africa).

"Collaboration is part of our global vehicle strategy," explained Dennis Beal, Vice President of Global Vehicles for FedEx Express. "Through collaboration we can exponentially improve and expedite what is possible. We value the opportunity Nissan has given us to provide experienced feedback and contribute to development of the best Nissan NV200 possible."

Battery charging options for the Nissan NV200 include a complete recharge overnight or up to 80 percent capacity in just 30 minutes using a Quick Charger. Details on how long the Nissan NV200 prototypes will last on a charge are not available. TorqueNews expects it to be less than the 73-100 mile average range of the Leaf, due to the increased size and weight of the NV200.

You might remember that the Nissan NV200 was chosen as the next-gen New-York City taxi, by the people of NYC. The idea that Nissan is looking heavily into commercial EVs is a great sign. In the future this might translate into a fleet of all-electric Nissan NV200 taxis in American cities.

Nissan has positioned itself as a leader in EV and battery technology. In the next few years it is clear Nissan will be a dominant force in the development of sustainable mobility and vehicles for everyone.

Tesla Giga Berlin's New Hurdle: It's Not Only the Gov't, but Now Tesla Itself
Teslas Are Sold Out Until 2023, But The Timing May Reverse
END_OF_DOCUMENT_TOKEN_TO_BE_REPLACED