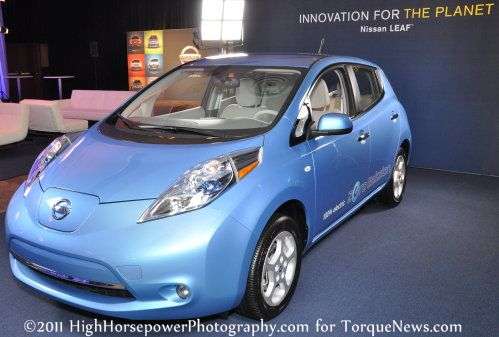 Just days before the first anniversary of the initial Nissan LEAF delivery on Dec. 11, Nissan North America, Inc. (NNA) is expanding availability of the all-electric vehicle into new U.S. markets. Having moved 20,000 units globally in its first year, the Nissan LEAF remains the world's first and only all-electric car in the mass market.
Advertisement

Nissan has re-opened the reservation process and is now taking orders for the 2012 Nissan LEAF in Delaware, Indiana, Louisiana, Nevada, Ohio, Pennsylvania and Rhode Island. Deliveries of the LEAF, including new standard equipment for the new model year will take place in these key markets beginning in spring 2012.

The upgrades include a battery warmer, heated steering wheel and heated seats both front and rear. The DC Fast Charge comes standard on the 2012 Nissan Leaf SL. Reportedly, the higher priced SL has accounted for 95 percent of Leaf sales with 90 percent of the buyers of the previous model opting for the quick charger.

Nissan also announced on Tuesday that it is moving up the launch of the Leaf in Illinois now, instead of the last phase of the Leaf rollout in late 2012, according to Anita Lienert writing on Insideline.com. The Leaf rollout to customers in Alabama, Florida, Georgia, Maryland, Mississippi, North Carolina, South Carolina, Virginia and Washington D.C. will launch July 25 following to the company’s planned schedule.

"Nissan LEAFs have been on the U.S. roads for one year now, and thousands of drivers have become living proof that a 100-percent electric, zero-emissions vehicle fulfills the daily needs of drivers from all walks of life," said Brian Carolin, senior vice president, Sales and Marketing, NNA. "We are seeing already-strong interest in the LEAF continue to grow across the country. This market expansion brings us one step closer to true, nationwide availability."

With this new wave of availability, Nissan LEAF is now available for order in 30 states, including Washington, D.C. Nationally, 50-state ordering will begin by March 2012.

LG's New EV Battery Plant Is a Welcome News for Tesla
Tesla Giga Berlin's New Hurdle: It's Not Only the Gov't, but Now Tesla Itself
END_OF_DOCUMENT_TOKEN_TO_BE_REPLACED