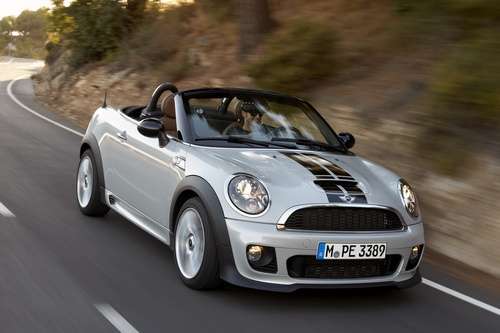 New 2012 Mini Roadster is the latest and greatest Mini

Mini is adding another vehicle to its lineup, the Roadster. This new two-seat model will pack all the fun, excitement, great handling, sportiness, and high-quality features which make all Mini cars popular. The Roadster will be the sixth model for the brand and the first two-seater.
Advertisement

This new Mini is going to retain all the characteristics and styling design of other vehicles from the brand. It will focus on providing a more open air driving experience, with its manually-opening soft top roof.

The Mini Cooper Roadster features a four-cylinder 122-hp gas engine that can accelerate from 0-62mph in 9.2 seconds. The top speed is 124 mph. Average fuel economy is 49 mpg.

The Mini Cooper S Roadster is a step up. It has a four-cylinder 184-hp gas turbo engine that can accelerate from 0-62mph in 7 seconds and has a top speed of 141mph. Average fuel economy is 47.1mpg.

The John Cooper Works Mini Roadster furthers the exhilaration of owning a Mini. This car is named for the legendary F1 race car designer John Cooper, who used to race the original 60's Mini. It features a 211-hp turbo gas engine that goes from 0-62mph in 6.5 seconds. The top speed is 147mph. Average fuel economy is 38.7mpg.

The Mini Cooper SD Roadster is a four-cylinder turbodiesel with a 143-hp diesel engine that can accelerate from 0-62mph in 8.1 seconds. The top speed is 132 mph. Average fuel economy is 62.8 mpg.

Cars come with many standards features such as Electric Power Steering and DSC (Dynamic Stability Control).

Mini Roadster can be matched to an individuals taste color and materials for upholstery, exterior mirrors, trim elements, and lines. As well as

The dimensions of the Mini Roadster are similar to that of the Mini Convertible. However, the Roadster is 3/10 tenths of an inch shorter.

The new Roadster will be packing a lot in a Mini!