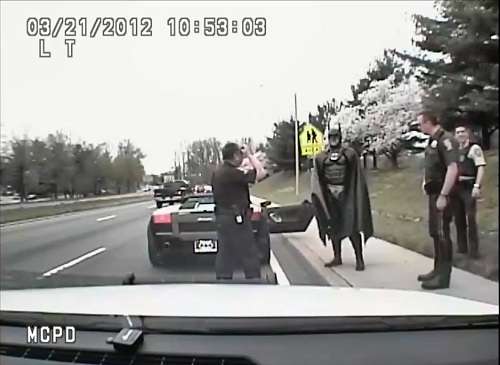 Batman gets pulled over in Lamborghini [Video]

When you are a police officer, you are bound to see everything at least once. Several Montgomery County Police Officers can attest to this at they pulled over Batman in a Lamborghini last week.
Advertisement

Batman was pulled over on March 21, 2012 around 10:47 am on Route 29 in Maryland for not displaying his rear license plate. In place of his license plate was a plate that said “Batman” and transporting Batman to Georgetown University Hospital to visit sick children was a stunning, awesome, and beautiful black Lamborghini Gallardo convertible. Definitely something Bruce Wayne, aka Batman, would be driving.

Who is this the “Dark Knight” in real life though? According to Michael Rosenwald of the Washington Post he is a Baltimore county businessman named Lenny Robinson. Mr. Robinson moonlights as Batman protecting sick children in hospitals in the Baltimore and Washington DC area from boring visits from uncool celebrities. Batman (Robinson) has spent thousands on his costume and Batman paraphernalia, which he happily gives away to the children he visits in hospitals. He does this as part of his work for the Hope for Henry foundation.

The wonders of the internet and in-car cameras in police vehicles allow us to see the entire incident online. The entire traffic stop video was released by the Montgomery County Police Department via the department's Youtube Channel only a few days ago. Already it has gained 240,000+ views in a few days. I can only imagine it will gain in popularity and is great PR for the Montgomery County Police Department. The story has gone viral and has been reported by many media outlets, including internationally.

Something I am sure a lot of people are wondering, did the police officers give Batman a ticket? Fortunately they let him go, since he is a fellow crimefighter. The officers were quite excited and enthusiast to be meeting the Dark Knight, and upon realizing the how cool Batman is, even took the opportunity to take pictures of the real superhero standing next to his Lamborghini.

This is not the first time that Batman has had a run in with police officers in Maryland. Such was the case last Halloween when Batman was on his way to fight crime at another children's hospital in the Washington DC area. Even superheros succumb to car trouble as Batman was left stranded on the side of Johns Hopkins Rd in Howard County. The problem? A flat tire on his Lamborghini, and no spare tire. (Lamborghinis don't come with spare tires!) The officers helped the caped crusader get his Lamborghini Gallardo towed. He was able to make it to the hospital by hitching a ride with a fellow superhero friend.