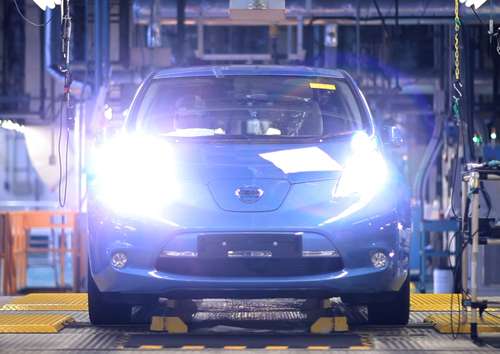 The Nissan LEAF electric car is currently scheduled to start US production in December of 2012, but the Japan earthquake may cause a delay.
Advertisement

The start of Nissan LEAF production in the United States may be postponed due to lingering effects from the Japan earthquake and tsunami that occurred on March 11.

US production of the 100%-electric LEAF is currently scheduled to begin in December of 2012. The lithium-ion batteries that power its electric motor are scheduled for September 2012 production. They will both be produced at Nissan's Smyrna, Tennessee plant, where the Nissan Frontier mid-size pickup truck is assembled.

Nissan's Global Zero Emission Vehicle Business head Hideaki Watanabe said "The earthquake is putting us in a very difficult situation. All the milestones and studies to localize production in the United States were stopped."

Watanabe did not give an official answer as to whether there would be a US-production delay for certain.

The Nissan LEAF currently for sale in the US is produced in Japan, and even before the earthquake occurred, deliveries of the LEAF have been so slow that Nissan has been facing mounting criticisms that it cannot meet its projections.

Now, after the earthquake, domestic Japanese production has slowed significantly and has yet to recover to its full capacity of 50,000 annually.

Nissan still expects to deliver between 10,000 and 12,000 LEAFs in the US this year. Around 7,000 orders have been placed so far in seven different states, including most of the West Coast, as well as Texas and Hawaii. Nissan expects to fill those orders by the end of the summer.

Once those orders are filled, Nissan will begin taking orders in seven more states in the Southeast, and once production begins in Smyrna, in all 50 states.

Nissan projects it will be able to produce 150,000 LEAFs a year at the Tennessee plant.