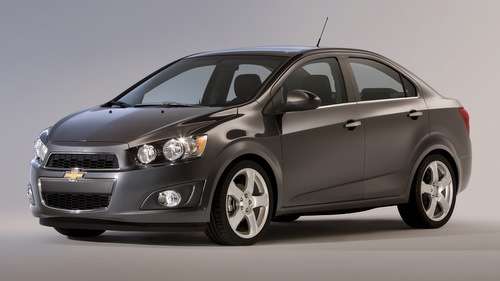 Chevrolet has announced the starting price of the Sonic subcompact will be $14,495, as well as information about its list of options and safety features.
Advertisement

Chevrolet has announced pricing for the Sonic subcompact vehicle will start at $14,495. The Sonic will be available in both four-door sedan and five-door hatchback models, like the Daewoo-based Aveo it is replacing. Unlike the Aveo, the Sonic will be built in the United States.

The Chevrolet Sonic will come standard with air conditioning, 15" alloy wheels, remote keyless entry, and OnStar. The range of powerplants is shared with the larger Cruze sedan, so the base engine will be a 1.8L Ecotec 4cyl engine while the optional engine will be the 1.4L turbocharged Ecotec engine. Transmission choices include a five-speed manual or six-speed automatic for the 1.8L, and a six-speed manual for the 1.4L turbo.

The Chevrolet Sonic LT will add a six-speaker sound system with satellite radio, USB/Bluetooth compatibility, heated front seats and mirrors, fog lamps, and 17-inch alloy wheels. Prices for the Sonic LT sedan will start at $15,695, and the LT hatchback will start at $16.495. The LTZ package will likely include aerodynamic body styling improvements like the Cruze.

Safety features will include 10 airbags, Stabilitrak traction and stability control, anti-lock brakes, and power rear-door child safety locks. Those features will be standard on every Sonic.

The Chevrolet Sonic with the 1.4 turbo and six-speed manual is expected to get 40mpg highway, but no other fuel mileage figures have been released. No acceleration or other performance numbers are yet available either. Production is expected to start early this fall; vehicles will arrive in dealerships shortly thereafter as 2012 models.