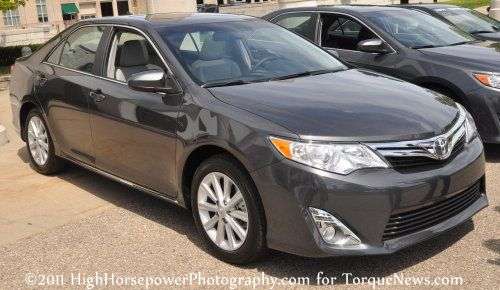 Toyota this week launched a marketing campaign for the all-new 2012 Camry called “It’s Ready. Are You?” The campaign demonstrates how the seventh-generation Camry addresses changes in consumers’ vehicle needs and expectations through innovations and improvements to the look of the Japanese company's flagship automobile.
Advertisement

The American-made Camry, which is assembled in Georgetown, Ky., has been America’s best-selling car for nine years running and 13 of the past 14 years. Leveraging nearly 30 years of Camry innovation and know-how, Toyota has created a bold, sophisticated design with a spacious and refined interior, improved driving dynamics, class-leading fuel economy and many safety features.

The 2012 Toyota Camry is among the first vehicles to offer Entune. Owners will be able to download a collection of popular mobile applications and data services via touch screen or voice command. Applications include Bing, IHeartRadio, MovieTickets.com, OpenTable and Pandora.

“When building the best-selling car in America — a car with nearly 7 million vehicles on the road today — you learn about what people want and expect from their cars,” said Bill Fay, group vice president of marketing for Toyota.

“We recognized the need to give Americans a smart, safe and worry-free vehicle they can rely on, and our marketing campaign communicates this message.”

The fully integrated campaign includes six TV spots that will run on Two and a Half Men and during NFL football games and the Rangers-Cardinals baseball World Series. Airtime has been bought for the Super Bowl also, as well as on the Toyota Halftime Report.

Sporty performance videos starring NASCAR driver Kyle Busch and his No. 18 car will be available on the Toyota USA YouTube channel and Toyota.com.

Digital billboards featuring Camry imagery will run atop the Walgreens building in Times Square to build intrigue for the 2012 model.

Beginning this month people can get behind the wheel of the 2012 Camry at more than 125 events that will run through March. The Toyota Drive Center national ride and drive tour will test drivers a chance to experience the vehicle firsthand.

Toyota has developed tailored campaigns with the Burrell, Conill and interTrend agencies to highlight the key attributes of the Camry for the African-American, Hispanic and Asian-American markets.