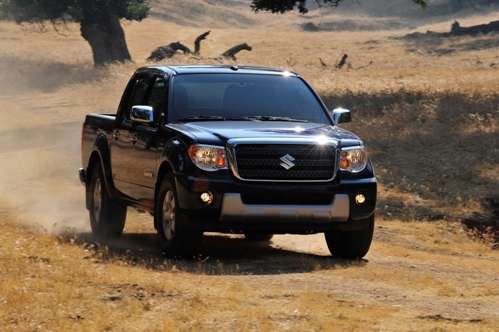 (TorqueNews) As the calendar year roars to a close, Japanese carmaker Suzuki is on track to deliver a profit from America as it enters 2012, with annual sales of its all-wheel-drive vehicles up 13% as Christmas and New Year's eve approach.
Advertisement

All four of the vehicles Suzuki sells in America report year-to-date sales that are higher than in 2010.

The Equator pickup truck (pictured) leads the way with a 49% increase in sales this year with 1,963 units sold through December.

The popular Equator, a midsize truck, remains available in both Extended Cab and Crew Cab body styles. Each offers rear-wheel-drive or four-wheel-drive configurations.

The leading-edge Kizashi Sport performance car is a strong second, with a 20% sales boost over last year with 6,345 units sold so far in 2011. This is the car that gives Suzuki its pedigree.

The way Suzuki tells it in promotional materials: "The Kizashi redefines the traditional performance sedan and moves the Suzuki brand upscale without abandoning Suzuki's traditional emphasis on content and value. Its active and energetic identity, a core component of the Suzuki brand DNA, is augmented by the vehicle's overall mission to provide strong yet refined street performance."

The Grand Vitara sport-utility vehicle's sales this year are up 11%. There were 4,509 units of the compact SUV moved from U.S. showrooms.

The SX4 sport sedan, hatch and crossover family show the lowest gain at 8%, but is the volume leader in the lineup with 11,189 vehicles sold.

The Brea, Calif.-based Automotive Operations of American Suzuki Motor Corp. was founded in 1963 by parent company Suzuki Motor and markets its vehicles in America through a network of about 250 automotive dealerships.

The Japanese company's world headquarters is in Hamamatsu, Japan.