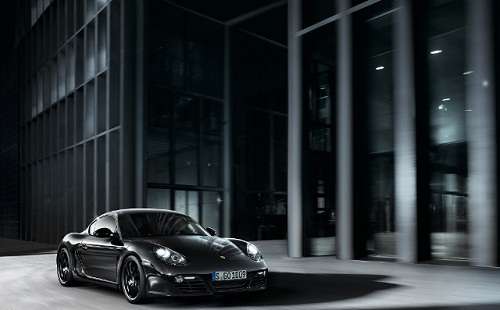 Porsche will start selling a limited-issue 2012 Cayman S Black Edition this summer. It will retail for $67,500 and only 500 of the sporty cars will be assembled. Peak speed when equipped with a 6-speed manual trans is 173 mph.
Advertisement

This mid-engine Black Edition comes only in opaque black. That means the entire body is painted in black and there are 19-inch Boxster Spyder design wheels that are black also. For uniformity, the trim is in black also. That includes side air intake grilles, the twin exhaust tailpipes and the model label on the deck lid.

Johnny Cash and Dale Earnhardt would have been proud of this car. The interior also is black, with understated aluminum and stainless steel accenting. The steel door-entry guards have Black Edition lettering and there is black leather on the SportDesign steering wheel rim. Instrument dials are in black instead of the typical white coloring.

To further the Porsche experience, the company embossed a Porsche crest on the headrests and put a decorative, limited-edition badge on the glovebox.

Like the other 911 and Boxster S Black Editions issued before this car, the Cayman S Black Edition a Convenience package that as standard equipment includes Bi-Xenon headlights, auto-dimming inside and exterior mirrors, a rain sensor and climate control.

The Infotainment package that comes with the caradds a touch-screen Communication Management system with navigation, a BOSE sound system and satellite radio with XM NavTraffic.

The car is powered by a 3.4-liter 6-cylinder engine with direct fuel injection, mounted in front of the rear axle.

Offered as an option is the PDK transmission. It allows the Cayman S Black Edition to accelerate from 0 to 60 mph in as little as 4.6 seconds with the optional Sport Chrono Package.

Nobody will buy a Porsche for its fuel economy, but its numbers are surprisingly strong for a car as cool as this one. The 2012 Porsche Black Edition delivers between 19 and 29 mpg, depending on the kind of driving you do.