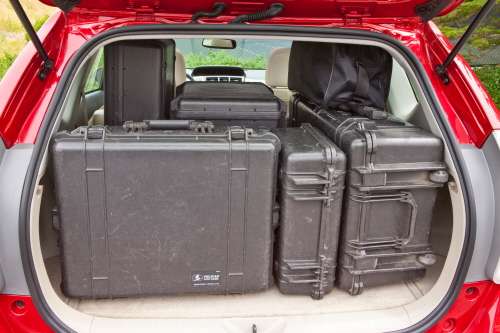 Toyota has a lot riding on its old standby, the Prius. But it's hardly a risk. The best-selling hybrid car in the world might be 14 years old, but as the Prius name gets older, the 2.1 million-plus people who keep buying it are saying with their wallets that it's getting better. And for 2012 there's a new choice: Three versions, so far, of the Prius v, which is big on cargo space and stingy on fuel consumption.
Advertisement

After the 2012 Prius v gets into showrooms, Toyota will stay on the fast track by introducing a plug-in Prius by March 2012 and a smaller Prius c a few months later.

Prototypes of the 2012 Toyota Prius v are road-ready right now. And on Wednesday they went out to play, so they could be seen and critiqued within the obscurity of a hilly section of southeast Michigan.

Maybe a half-dozen Prius v automobiles were driven by two dozen reporters and car critics from morning until afternoon around the college towns of Ypsilanti and Ann Arbor, Mich., west of Detroit. There were a few gawks and raised eyebrows from the fresh-faced student set (who knew what the Prius v models were) but for the most part the Prius v, even a fire engine red one that I took to the streets, drew scant notice from people over 21.

Regardless, Toyota is puffing out its chest like a proud papa.

"The Prius family will define our future," Ed La Rocque, national marketing manager-advanced technology vehicles for Toyota, told reporters in a presentation. After a brief Q&A session, writers took 10- and 50-minute jaunts on Interstate 94 and drove through the foliage-covered Eastern Michigan University campus.

It's hard to argue with La Rocque's assessment about the Prius' value to Toyota. The Prius already has 53% of the hybrid market. Toyota has stood out for years in developing global trust in hybrid technology.

Skeptics, for the most part, have shut up about the Prius. It's a great car, and just about everybody knows it. Hollywood has been especially fast in embracing this green machine. La Rocque acknowledged Wednesday that Toyota is shopping for a big name to endorse its new Prius v, which likely will hit dealer showrooms in October. But he stopped short of identifying a movie star who might be the one to glad-hand to move the metal for Toyota.

The Prius v for 2012, the first of 10 new models from Toyota in the next 20 months, comes in three persuasions: As a Prius v Two, a Prius v Three and Prius v Five. There is no badging to reflect these nuances. The Five will be the technology-rich version and the fanciest Prius v available. The other two reflect different packages that will be on the car. La Rocque said there is a Prius v Four in the works, too, but he wouldn't say what would be on that version, if it ever makes it to market for 2012.

The price for the 2012 Prius v will start at around $26,000 and elevate from there. Toyota has not put a firm MSRP on it yet but acknowledges it will cost a little bit more than standard Prius models.

What makes the Prius v different than previous versions of the car is its roominess. Even though it looks like a car, the Prius v in actuality has more space than some Detroit Three SUVs. La Rocque said the cargo space (pictured) is 58% larger than other Prius models.

Toyota brags that even with the Prius v being taller and wider and heavier than other Prius models, its engineers have been able to achieve a very good .29 coefficient of drag. That is up from .25 on the other cars. Even so, on the freeway drivers can feel the heft; the Prius v sways at 80-plus mph speeds that amplify wind noise. And that's after the wind has whooshed through fins that Toyota put on the car especially to hush wind noise.

Don't think the Prius v is a cow. Even though it is not its svelte self with the extra space inside, it still gets incredible mileage: 44 mpg on the expressway and 40 mpg in city driving.

The EPA labels the Prius v a "midsize wagon." Toyota thinks the "v" stands for "versatility" so it will "let the market tell us what it is," La Rocque said. Toyota believes consumers will, on any given day, see the Prius v as a wagon, crossover or sport-utility vehicle, depending on their needs of the moment.

Toyota considers the Prius v a family hauler and commuter vehicle that will be bought by couples who are 35 to 45 years old, with kids. Toyota in many cases expects the Prius v to be the "second" or "weekend" family car to go out and do things in while the first Prius, used for everyday transportation during the week, is parked. The Prius v has substantially more room to cart stuff around than a standard Prius.

You would expect the Prius v to have fuel-efficient bells and whistles, and of course it does. The car drives in normal, electric (EV), economy (ECO) and power modes, to use the right energy for the right situation.

Safety features include a backup camera so you don't run over people or hit things and seven airbags, including one for your knee. For the first time a Prius will come in "clear sky metallic" exterior paint. The highest-end Prius v Five offers technology that includes a stolen vehicle locator and an SOS button, said Kirk Forsht, a Toyota product training administrator who made the trip from Los Angeles to Michigan to break down what the Prius v can do and how it does it.

Toyota considered making the Prius v in Blue Springs, Miss., but instead will build Corollas there, Toyota spokeswoman Celeste Migliore said. Several thousand jobs are being created in Mississippi right now. While the current Prius v is being made in Japan, Toyota continues to examine the possibility of building the cars somewhere in America, Migliore said. She declined to identify possible production sites.

Hawke Fracassa covers the auto industry from Detroit for TorqueNews.com. You can reach him at [email protected]

For news about the 2012 Toyota Prius, CLICK HERE:
http://www.torquenews.com/1063/toyota-prius-steps-performance-plus-option