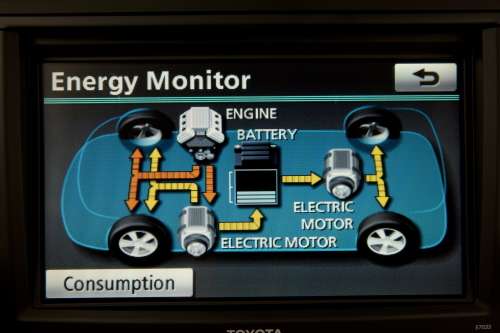 Toyota continues its quest for efficiency with the 2012 Highlander Hybrid, a 4-wheel drive crossover utility vehicle that starts at $38,000 for the base model and $44,000 for the Limited edition. The two 2012 hybrid models were rolled out today by Toyota.
Advertisement

The 2012 Highlander Hybrid generates some power for its rear wheels with an electric motor that kicks in some extra torque as needed. An EV mode lets a driver go at low speeds for short distances. Toyota recommends its usage in stop-and-go traffic.

The 2012 Highlander Hybrid is distinguished from other Highlanders by a unique grille and bumper design, color-keyed rockers with chrome accents and vertically stacked fog lamps. The projector beam headlights and taillights have blue lens covers.

The Highlander Hybrid employs the advanced Vehicle Dynamics Integrated Management system, which Toyota says is designed to "enhance handling, traction and braking systems that normally react to vehicle driving conditions by anticipating tire slippage before a skid, slide, or wheel spin occurs and helps to make corrections in a smooth, progressive way."

Besides things like traction control and ABS, the Highlander Hybrid uses special software to integrate the Electronic Throttle Control with intelligence and Electronically Controlled Brakes.

The interior of Hybrids are all 94.1 cubic feet, slightly smaller than standard Highlanders (95.4).

Daniel Holmgren wrote on December 29, 2011 - 4:09pm Permalink
I am very interested in the highlander hybrid design with its impressive MPG and performance. I have done research on the internet and have a fair understanding of the concept but need more specific design information. I would like to see accruate pictures of the engine,ecvt,electrical motors, battery system if possible. Some hybrid pictures I have seen on the internet are OK but, I have yet to find a complete Toyota Highlander2012 Hybrid drive train system. If possible please direct me to a web site for more up to date information. As you may guess I am want to understand the long term reliability of the hybrid design. Thanks Dan
used car dealer wrote on December 29, 2011 - 5:02pm Permalink
Toyota is the leader when it comes to hybrid vehicles and the Highlander definitely sounds like it boasts some of the most advanced tech features in the hybrid segment. A little bit pricey but the warranty should give drivers plenty of piece of mind.