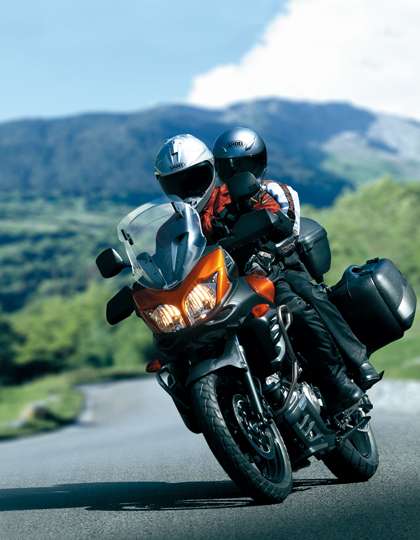 Suzuki fails to impress with its new 2012 V-Strom

The Suzuki V-Strom 650 is the "poor" mans adventure bike. Much in the same way a Cessna is a "poor" mans personal aircraft. The little V-Strom does have some glaring strengths and no weaknesses, save one: It's boring. When Suzuki announced that a new one was going to be shown off, everyone got excited. All they had to do was fix the boring aspect of the bike, that's it! So did Suzuki fix it? Nope!
Advertisement

The problem is that BMW came out with an 800cc version of their awesome 1200GS adventure bike. Then Triumph came out with direct competitor to the BMW, with an 800cc adventure bike of their own. These two bikes are ugly, tough, well built, comfortable and will take you across any remote and inhospitable country you could ever want. When Suzuki announced that they were updating the V-Strom, we all thought that they would toughen it up, and make it a bit more dirt oriented like the BMW and Triumph.

It turns out that it looks, to the untrained eye, exactly the same as the old model. It really is like trying to tell two identical twins apart. One has slightly more arched eyebrows, but other than that you can't tell the difference. What I can't fathom is why did Suzuki even bother? Additionally I can't understand why the Japanese refuse to build an adventure bike to compete with the Europeans who are far in the lead in this category. It's not like it's a niche product, BMW sells tens of thousands of adventure bikes.

The V-Strom, until the BMW 800gs and the Triumph 800xc, sort of had a little niche all to itself. It wasn't big, powerful and intimidating like the BMW 1200GS or KTM 990 Adventure. It was smaller, lighter and modest. It performed it's role well (long distance pavement touring, with the occasional dirt road.)

The best and toughest adventure riders out there who know how to use the internet, go to ADVRider.com. Looking at the discussion currently ongoing about the release, those guys aren't impressed. When your core audience and buyers aren't impressed, you've done something wrong. In Suzuki's case, they didn't do anything wrong, they simply didn't do anything. The whole thing is confusing for everyone.

There's nothing wrong with the new V-Strom. I'm sure it will be just as good as the old model. But that's the problem, just as good doesn't cut it. It needs to be better, it needs to be miles and above better to pull sales from the other adventure bikes, and it just won't. It will sell as it normally has. More of the same, is that what you really want Suzuki?