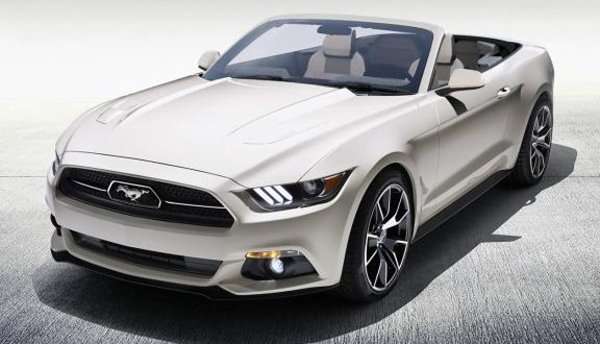 Ford Motor Company has announced that they will build one 2015 Ford Mustang GT Convertible with the 50 Year Edition package to be given away via an ongoing online raffle – with the winner to be announced at the 2014 Woodward Dream Cruise and all proceeds going to charity.
Advertisement

The original Ford Mustang that was introduced back in 1964 was a convertible and it came as a big surprise that when the 50 Year Limited Edition Mustang was announced for the 2015 models last month, it came as a big surprise that none of those 1,964 special pony cars will be offered as a ragtop. Fortunately, Ford Motor Company has announced that they will build a single 2015 Ford Mustang GT Convertible with the 50 Year Limited Edition package and that unique American performance car will be raffled off with tickets costing just $20.

The 2015 Ford Mustang GT 50 Year Edition Convertible features the same Wimbledon White exterior paint and the same two tone interior layout as the 1,964 50 Year Edition 2015 Mustang coupes, as well as the unique wheels, grille and badges as the hard top models. The 2015 Mustang GT 50 Year coupes come fully loaded inside and out, and the 1-off convertible will come in the same form with the only real difference being the fact that the convertible won’t come with the awesome louvered rear quarter window glass…although the fact that it is a convertible more than makes up for that.

Even if you don’t win the 2015 Ford Mustang GT Convertible with the 50 Year Edition package, you will be contributing money to a good cause as all proceeds of this raffle will go to benefit the National Multiple Sclerosis Society. Automakers have come to routinely offered 1-off packages of sought after models like the Ford Mustang GT, but many of them are sent to high profile collector car auctions where they sell for dollar values that put them grossly out of reach of the average Mustang fan. While selling this car at auction would have likely raised big money for the National Multiple Sclerosis Society, it would have only be within the reach of a few people around the country. On the other hand, this raffle program puts this 1-of-1 Mustang GT well within the reach of every Mustang fan in America with tickets costing just $20 a piece. Some might point out that the odds are stacked with there likely being a great many tickets sold, but John Q Public has a far better chance of winning this auction with a $20 ticket than he or should would in battling someone like Rick Hendrick or some other millionaire at an auction.

Those TorqueNews readers who would like to buy one or more chances to win this unique 2015 Ford Mustang GT Convertible can click here to visit the minisite set up to handle sales of the tickets between now and the August 16th drawing which will take place in the Woodward Dream Cruise’s Mustang Alley. This website also has plenty of information You do not need to be present at the Woodward Dream Cruise to win the unique 2015 Mustang GT Convertible so what are you waiting for? Head over to the special website to contribute $20 to the National Multiple Sclerosis Society and for doing so – you might just win a super rare 2015 Mustang convertible.