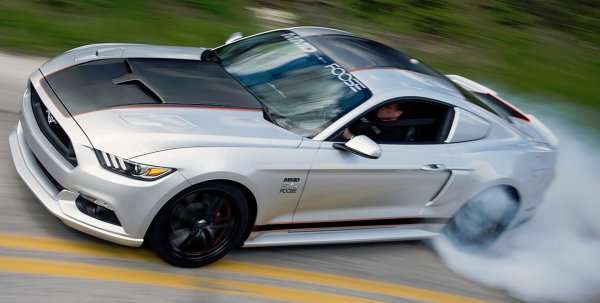 Win a Foose Design 2015 Mustang with 810hp from American Muscle

If you spend your days dreaming about tearing up the streets in a 2015 Ford Mustang GT sporting a custom exterior design and packing an 800 horsepower engine, but you don’t have the budget for a monster like that – the folks at American Muscle are currently running a content to give away an 800 horsepower 2015 Mustang GT customized by Chip Foose.
Advertisement

American Muscle is one of the leading aftermarket retailers for the Ford Mustang and over each of the past 6 years, the Malvern, Pennsylvania company has held an all-Mustang car show. Over the course of this 6 year show program, it has grown to be one of the biggest Mustang events in the country, but American Muscle is always looking for ways to kick their show up another notch. At the 2015 show, they will give away the modified Mustang GT shown above – packing 810 horsepower and featuring an exterior design penned by automotive legend Chip Foose.

The MMD by Foose Mustang GT
The 2015 Ford Mustang GT shown above is a collaboration between American Muscle, Chip Foose and Modern Muscle Design and the result is nothing short of stunning.

On the outside, the MMD by Foose Mustang GT gets an elaborate dress up kit which includes a new chin spoiler, a hood scoop, unique rocker panels, the side scoops behind the doors, the quarter window louvers and the rear spoiler. Next, the MMD by Foose Mustang gets a thick black stripe with thin red trim that runs up over the middle of the car while similar, smaller stripes run along the lower body sides. Finally, 20 inch Foose Design wheels wrapped in Pirelli tires complete the unique exterior appearance.

It should be noted that these MMD by Foose body bits will soon be available for purchase exclusively through American Muscle, so if you love the look of this custom Mustang GT and you don’t win the contest, you can still build this car on your own – you just need to buy a new Mustang first.

To make the MMD by Foose Mustang GT more than just a pretty face, the folks at Bama Performance hooked it up with a 2.9L Whipple supercharger that increases the output from 435 to 810 horsepower – 650 of which reaches the rear wheels by means of the carbon fiber driveshaft and hardened axles from The Driveshaft Shop. This car is also fitted with a Vogtland Sport Suspension that improves handling and gives the Mustang a more aggressive stance while a Magnaflow exhaust system adds power and sound. MMD might really stand for Modern Muscle Design, but with 810hp, this beast could be called the Mustang of Mass Destruction.

How to Win the Foose 2015 Mustang
The American Muscle contest to win this slick customized 2015 Ford Mustang GT is as simple as going to the American Muscle website and filling out a very basic form. You are permitted to sign up once each week until the registration period ends on August 3rd. Once the winner has been selected, he or she will be flown to Pennsylvania for the big Mustang show on August 15th. While there, the winner will be presented with the keys to their new 810 horsepower Ford Mustang by Chip Foose himself.

So, if you would like a chance at winning a 2015 Ford Mustang with 810 horsepower and an exterior design personally penned by Chip Foose, click here to visit the registration page. I’ve already filled out my form for this week!