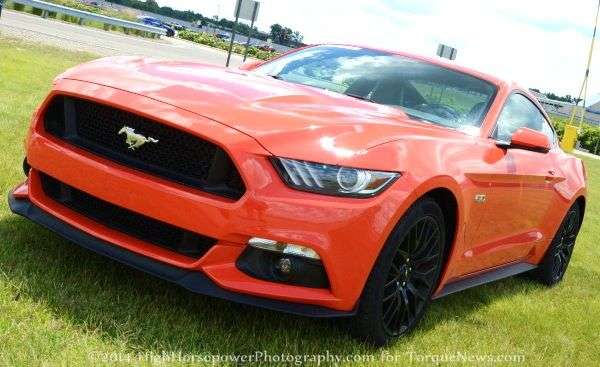 If you are absolutely in love with the 2015 Ford Mustang GT, but you aren’t at a point in your life where you can afford to drop $30k on a new muscle car, the folks at Stanley Black & Decker could make your dream of owning a new Mustang come true – simply by liking their Facebook page and filling out a basic information form.
Advertisement

The least expensive 2015 Ford Mustang GT starts at $32,925 including destination – which the Ford website estimates will lead buyers to a payment of about $490 a month after a $3,300 down payment. For many people, that is more than they are willing to or capable of paying per month so for those people, owning a 2015 Mustang GT anytime soon is little more than a dream. Fortunately, the folks at Stanley Black & Decker can make that dream come true without costing those dreamers a single cent.

STANLEY BLACK & DECKER Ford Mustang Sweepstakes
For those reading this who do not follow the NASCAR Sprint Cup circuit, Stanley/DeWalt Tools is the sponsor of the #9 Ford Fusion driven by Marcos Ambrose and owned by The King – Richard Petty. In cooperation with Ford Motor Company, Stanley Racing is giving away a 2015 Ford Mustang GT and entering the sweepstakes is 100% free. All you have to do is visit the Stanley Racing website where you will be prompted for details like your name, your birthday, your address and other information vital to giving someone a free car. Once you have filled out that very simple form, you are then “required” to like the Stanley Racing Facebook page…and after that, you are officially entered to win a 2015 Ford Mustang GT.

In addition to winning a 2015 Ford Mustang GT, the winner of this sweepstakes will also win a VIP package to the 2014 Ford Championship Weekend November 14-16, where you and a guest will see the all of the NASCAR action first hand as the drivers battle for the 2014 Sprint Cup championship.

Keep in mind, the entry period for the STANLEY BLACK & DECKER Ford Mustang Sweepstakes ends on August 23rd, so you have less than two weeks to sign up before you will lose your chance to drive away in a free 2015 Mustang GT. Click here to visit the site to sign up. The page will open in a new window, so that you can keep reading about the Ford Mustang here at TorqueNews.com.

Lots of Other Stanley Prizes
While only one person will win the 2015 Ford Mustang GT and only two people will get to enjoy the VIP treatment at the 2014 Ford Championship Weekend, this sweepstakes has a collection of other great prizes such as a STANLEY 36 volt cordless lithium ion floodlight, 2 Fatmax gray metal plastic tool boxes, 2 Fatmax 24” non-magnetic levels, a DEWALT 20 volt max lithium ion compact drill/driver kit, 2 25 piece ½” drive socket sets, and a DEWALT 12-volt/20-volt worksite radio. With a list of fairly pricey prizes like that, it is well worth the little time that it takes to sign up for this – even if you somehow don’t want a free 2015 Ford Mustang GT or a trip to the 2015 NASCAR championship weekend.