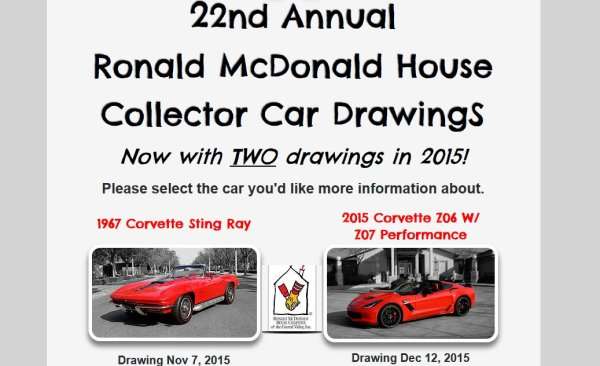 If you have been wanting to put a 2015 Chevrolet Corvette Z06 in your garage but you cannot handle the $80k price tag, you are in luck as the Ronald McDonald House is holding a raffle for the new super-Corvette and a 1967 Corvette Stingray with prices beginning at just $3 per ticket.
Advertisement

The 2015 Chevrolet Corvette Z06 is one of the most talked about modern American performance cars and with the C7 Z06 being the most track capable Corvette of all time, it is easy to understand why the motoring world is so high on the newest super-Vette. On the other hand, the 1967 Corvette Stingray with the 427 big block V8 is one of the most highly sought after classic American performance cars of all time and, like the new Z06, it is very easy to look at the ’67 427 Stingray and understand why this car is so loved.

The problem with both of these Corvettes is that they are very expensive in the modern market. The loaded 2015 Corvette Z06 around $105,000 while the value of a numbers matching, show quality 1967 Stingray Convertible with the 427 cubic inch, 435hp V8 is listed as having a market value of $105,000. For most people, the $105k C7 Z06 is just as out of reach as the $105k C2 big block drop-top, but thanks to the Ronald McDonald House Charities of the Central Valley, you could win both of these cars for as little as $6.

You read that right – if your luck is really that insanely good, you could win a 2015 Corvette Z06 and a 1967 427 Stingray convertible for just $6 via the dual Ronald McDonald House Charity raffles. Also, the winner of each of these cars will receive $20,000 in cold, hard cash to make the deal that much sweeter. That is a total of $250,000 in prizes and a ticket in this raffle begins at just $3 so in spending $6 for two tickets, you have a chance at winning both of these remarkable GM performance cars.

The 1967 Corvette Stingray
The first car to be raffled off from the Ronald McDonald House Charities of the Central Valley in 2015 is the 1967 Chevrolet Corvette Stingray Convertible. This is a numbers matching vehicle painted Rally Red and powered by a 435hp 427 cubic inch big block V8 mated to a proper 4-speed manual transmission. Features of this high performance classic Corvette include original side exit exhaust, factory headrests a black convertible top aluminum wheels and a factory radio delete package (1 of just 747 in 1967 with the radio delete). According to the raffle fine print, this 1967 Corvette Stingray Convertible has a value of $105,000, but prices for comparable cars online range from just under $100k to well over $200k, depending on the various options and such.

The drawing for this beautiful 1967 big block Corvette will be held on November 7th 2015.

The 2015 Corvette Z06
The second car included in the 2015 Ronald McDonald House Charities of the Central Valley collector car drawing is a 2015 Chevrolet Corvette Z06 coupe in Torch Red. This beast is powered by the supercharged LT4 V8, which sends 650 horsepower and 650lb-ft of torque through the 7-speed manual transmission, making it the most powerful stock Corvette ever. The C7 Z06 being given away by the Ronald McDonald House is fully loaded, including the 3LZ trimline, the high performance Z06 package, the Performance Date Recorder, the carbon fiber interior package, the Competition sport seats, a removable carbon fiber roof panel, carbon fiber ground effects and black painted wheels.

As mentioned above, whoever wins each of these two Corvettes will also get $20,000 in cash to cover any expenses that come with picking up the prize.

Ticket Prices
The ticket prices for the 2015 Ronald McDonald House Charity raffle start at just $3 for 1 ticket, but the more tickets you buy, the less that each one costs. The full schedule of raffle ticket pricing is available below. It is $3 for one ticket, but if you buy a thousand of them, you are only paying $1.20 a piece while also giving yourself the best chance at winning one (or both) Corvettes.

Most importantly, all of the money collected as part of this raffle of the new and old Corvette goes to the Ronald McDonald House Charities of the Central Valley, which helps families of kids fighting severe illness with the costs associated with helping their sick little ones get healthy. Click here for a closer look at the information on the raffle, including full information on buying your raffle tickets.

Tesla Contemplates A New Strategy for China Retail even As Sales Boom
Jay Leno on Elon Musk & EVs: “I Think He Should Get ... Credit"
END_OF_DOCUMENT_TOKEN_TO_BE_REPLACED