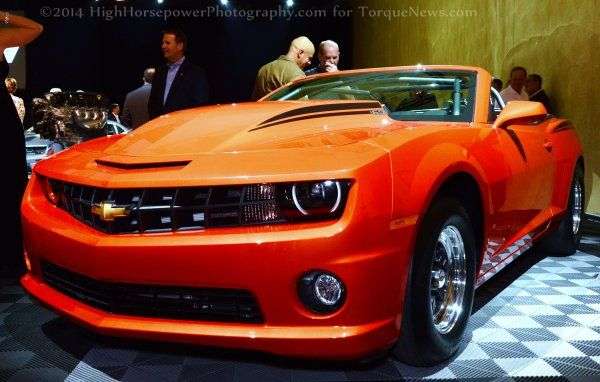 The news that General Motors is recalling every single current generation Chevrolet Camaro hit yesterday as big news, but that is more because of the long list of ignition-based recalls in the past few months and the media frenzy surrounding those recalls and less because it poses a significant risk to owners – making this a much less critical recall for the owners than the one that pertains to the Chevrolet Cobalt.
Advertisement

Now, I should start by pointing out that there is no question that having a vehicle shut itself off while driving can pose some serious safety risks so like the Chevrolet Cobalt, the problems plaguing the Chevrolet Camaro can pose a risk to the occupants of those half million GM muscle cars and everyone else on the road around them. However, the recent problems plaguing millions of compact General Motors products around the world are a considerably bigger problem for Cobalt owners than it is for Camaro owner. In fact, if not for the ongoing media buzz about the compact car ignition issues that have reportedly cost more than a dozen people their lives and spawned a massive government investigation, I believe that this Camaro ignition recall would have skated across the surface of the automotive media with little more than a passing mention – and that interest would only come because of the fact that it impacts every modern Camaro built.

If Chevrolet had recalled every Camaro ever for something as simple as a loose badge on the fender, it would make big news because it is an issue that covers the entire modern generation…especially right now. This problem is slightly more serious than a badge recall, but it doesn’t possess nearly the same level of risk as the small car ignition recall.

This Camaro Recall is Only a Big Deal to the Media
Unfortunately for General Motors, this Chevrolet Camaro recall came amidst a media firestorm in which many journalists are busy crucifying Mary Barra and her company over their slow reaction on addressing millions of faulty ignition cylinders in one of their bestselling vehicles. Because of that, what is little more than a precautionary recall for the Camaro turns into a huge ordeal because in addition to the millions of cars already facing ignition recalls – every Camaro ever built is now part of the problem. In all reality, while the Camaro does have a possible ignition issue that they are working quickly to address, the problems with these muscle cars has absolutely nothing to do with the problem that is forcing GM to recall and repair over 2 million small cars around the US. Other sources might lead you to believe otherwise, but the problem that spurred the recall of every 5th generation Camaro is very different from the issue plaguing the Chevrolet Cobalt.

The other issue is that these cars were all built while General Motors was overseen by the US Government through the bailout loan process, but that is more of a problem that was suggested during the initial compact recall and the Camaro is simply (and wrongfully) being grouped in with those troublesome compact cars. For the anti-bailout side on the political side, this comes as another way to show how the current administration allowed this all to go on right under their noses without taking notice. On the automotive front, this comes as yet another recall in what has become an unbelievable string of safety issues that have sprung up during 2014.

How the Problems Differ
The reason that I find the Chevrolet Camaro recall to be far less of a concern to owners than the one affecting the Chevrolet Cobalt (and others) rests in the problem at the heart of the recall.

In the case of the Chevrolet Cobalt and the other small cars recalled over the past few months, it has been found that the ignition cylinder can turn out of the Run position without the driver doing anything more than hitting a bump and having too many keys on their keychain. Basically, having excessive weight hanging on your ignition key in the Chevy Cobalt provide enough force when a bump is hit to spin the key out of the Run position. When that happens, the Cobalt will lose power steering, power brakes and airbag functions so not only will the car become very hard to steer and stop, but it will also be more likely to cause injury in the event of an accident – all without the driver doing anything more than having random clutter on their keychain and hitting a pot hole or stretch of rough roads.

On the other hand, the Chevrolet Camaro suffers from an issue where the driver may hit the large ignition key/fob combo hard enough to spin the key and turn the key out of the Run position. It seems that the most common issue is for the driver to swing his or her knee up and contact the ignition key in a way that turns the key out of Run. The location of the key is the problem here, not an actual issue with the ignition system so to fix the problem GM will replace the one piece key fob combo with a two piece unit that has the fob hanging off of the ignition key. This new key will likely be small enough that it is nearly impossible to hit it with your knee…even though it is difficult to do it in the first place based on the input of some Camaro owners.

Basically, if you are careful not to lift your right foot up so far and bend your knee so far that your knee whacks the ignition key; you can guarantee that your Camaro will not shut itself off while driving. It is being recalled because it is possible to turn the Camaro off with your knee and because GM is taking every step to make sure that there are no safety questions with their vehicles – not because it will just shut itself off when you hit a bump like the problem with the Cobalt.

How to Drive Your Chevy Safely
If you own a Chevrolet Cobalt or one of the other compacts that have the ignition cylinders that can shut off while you are driving, even the government investigation has found that making sure that you do not have anything on your ignition keychain can almost guarantee that the problem will not hit you while driving.

If you own a Chevrolet Camaro, just make sure not to hit your key fob combo with your knee while driving and you will be fine. In any case, Camaro owners will all be getting new keys in the coming months while GM works to repair the 2.5 million compact cars that have the ignition switch that may shut off without being touched by the owner.