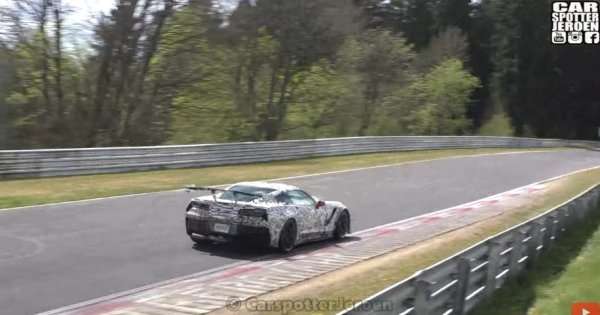 What Might be the C7 Corvette ZR1 Unofficially Laps Nurburgring in 7:30-ish

Another video showing what is believed to be the C7 Chevrolet Corvette ZR1 lapping the Nürburgring has arrived online and in the video, the mysterious Corvette gets around the track with traffic in roughly 7 minutes and 30 seconds – although that number is far from any sort of official time and the official time will almost certainly be quicker.
Advertisement

We don’t actually know for sure, officially, that General Motors is planning to offer a C7 Chevrolet Corvette ZR1, but it is no secret that the automaker is working on something a bit spicier than the current Z06. There have been tons of spy shots and videos showing the camouflaged C7 Corvette test car working out around the United States with a huge rear wing and more recently, video has hit the internet showing this mysterious Corvette test car working out at the famed Nürburgring.

The Nürburgring videos of what we believe to be the C7 Corvette Z06 gave us our clearest look yet at the extreme aero setup of this higher performance Chevy supercar while also letting us hear the engine in a variety of different situations.

The video that we bring you today offers many of those same advantages, with lots of great sound clips coupled with a good look at the car from every angle – including the add-on exhaust silencers – but this video has a unique feature. The guy filming the action from the side of the track had a timer running as the Corvette made its way around the track and with this completely informal way of timing, the car which might be the next ZR1 made it around the Nürburgring in around 7 minutes and 30 seconds.

Corvette ZR1 Lapping the Ring
Before we talk about this 7:30-ish lap of the Nürburgring by what might be the C7 Corvette ZR1, let’s point out several key bits of information to be considered.

First and foremost, a guy standing along the side of the track, pushing the start and stop button on a phone app is the furthest thing from an accurate measurement of this Corvette’s Nürburgring lap time. We are only discussing this time because it could foreshadow a record time by this new Corvette and in all reality, we can expect that this Corvette could turn a much quicker lap time, especially when we consider the fact that the 2017 Camaro ZL1 ran an official time of 7:29.60. We don’t know what this Corvette is, but it will most certainly be quicker than the new ZL1.

That brings us to our next key factor with this Corvette Nürburgring video. This is a test run with relatively dense traffic. There appears to be clear sailing around the videographer, but we have no way of knowing how much traffic held this car up elsewhere on the track. Something as simple as being held up heading into a high speed stretch can have a huge impact on the full lap time and since there has been no word from GM on this mysterious Corvette – it might not be running all-out laps.

However, even with the fact that there could have been dense traffic at other points on the track and, for all we know, the driver could be taking it easy, but we know that with an unofficial timing system – this Corvette made it around the Nürburgring in around 7 and a half minutes. What is likely a slower-than-ideal time for this Corvette would be an insanely quick time for almost every car on the planet, as only a handful of production road cars have gotten lower into the 7-minute range.

One such car is the C6 Corvette ZR1, which is the quickest Chevy to lap the Ring thus far with a time of 7:19.63. This new Corvette – whether or not it is called a ZR1 – will almost certainly be quicker than that. We have to wonder if the Dodge Viper’s record time of 7:12.13 might not be the key benchmark time for this Corvette, but after running a 7:30 with traffic – this Corvette just might have a real shot at the 6-minute mark.

Tsingshan's Threat to Tesla: EV Maker Is In Battery Crosshairs
Tesla-Funded Research Reveals One of The Biggest Mysteries of EV Battery
END_OF_DOCUMENT_TOKEN_TO_BE_REPLACED