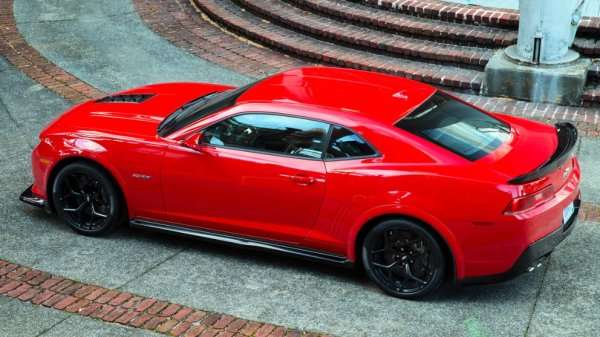 What If the 6g Camaro ZL1 Offers Z28 Handling?

Since the 2016 Chevrolet Camaro debuted at the private event on Detroit’s Belle Isle, there has been a longstanding debate as to whether the next super Camaro would be a new ZL1 or a new Z28, but I believe that the next premium performance model could combine the big power of the ZL1 with the insane handling capabilities of the Z28 in one amazing muscle car.
Advertisement

There have been a few different Chevrolet Camaro test mules caught in action over the past few weeks and most have been quick to label this mysterious 6th gen test car as the next ZL1. These test cars have all had a hood that is obviously vented in a similar manner to the newest Cadillac CTS-V and the Corvette Z06 – both of which come with the LT4 V8. Since the previous Camaro ZL1 shared a supercharged engine with the top of the line Caddy and Corvette, it is expected that the LT4-powered 6th gen Camaro will be the new ZL1.

However, based on both the test cars running around my home town of Milford Michigan and the current state of the American muscle car segment, I strongly believe that the new Camaro ZL1 could offer Z28-like handling capabilities in addition to the monster power – making the 6th gen Camaro ZL1 a far more impressive overall performance car.

Camaro ZL1 Should Offer Overall Performance
When the 5th gen Camaro ZL1 arrived with 580 horsepower in 2011, it was the most powerful muscle car on the road while also offering excellent handling capabilities. When the 6th gen Camaro ZL1 arrives, it is almost guaranteed to be less powerful than the Hellcat Challenger, so it won’t be able to draw in non-enthusiast buyers based on being the most powerful. Mind you, Camaro and Chevy fans will happily snatch up the LT4 Camaro ZL1 with somewhere in the area of 640 horsepower, but for those non-brand biased buyers who want the most power – the Camaro ZL1 won’t be it.

Because of that, we can bet on the fact that General Motors will make sure that the 6th gen Camaro ZL1 will beat the tar out of the Hellcat Challenger on a road course, if not on the drag strip. The test mules being discussed online and those on my local roads have a prominent chin spoiler, large cooling ducts in the front fascia, the vented hood, big brakes, quad exhaust tips and a large spoiler out back.

Provided that these cars are indeed the next generation Camaro ZL1, they appear to have more aero upgrades than the 5th gen ZL1 and while that big rear wing will help provide tons of downforce at the kinds of speed a 640hp V8 will reach, it should also help improve handling. Keep in mind, the 5th gen Camaro with the big rear spoiler was the Z28 (shown above in red). Add in the new, lightweight Camaro chassis, the huge brake packages and the next generation Magnetic Ride Control system and you have a 6th gen Camaro that should pack somewhere in the area of 640 horsepower while possibly offering vastly superior handling compared to the 5th gen ZL1.

Realistically, the huge power advantage and the improvements in chassis design could allow the 6th gen Camaro ZL1 to best the 5th gen Camaro on a road course, so while I still expect to see a Camaro Z28 that removes all of the weight-adding items that you don’t need to go road racing, I wouldn’t be surprised for one second if the next supercharger Camaro ZL1 proves to be far more than just a straight line performer.

Edward Chew wrote on August 5, 2015 - 5:07pm Permalink
I just read your article and after what I read I'm having a hard time understanding why you think this camo car is the ZL1 and not the Z/28. I had Chevrolet tweet me saying that the Z/28 will be announced later this year.
vbondjr wrote on August 6, 2015 - 10:29pm Permalink
To be perfectly honest, I hope the new ZL1 doesn't have the LT4 in it. I would much rather see an improved version of the Z/28's 7.0L engine. Just think GMPP came out with a 480hp version of the LS3 just by adding a new cam, the LT1 is the same size as the LS3 but offers a full 34hp more. You take a cam profile that adds roughly 50hp plus a set of heads that adds 30hp to a 505hp N/A v8, put a set of factory mid-length Tri-Y headers on it, a revised intake manifold and a true Cold air intake (smooth intake tube that doesn't allow heat transfer along with a high flowing paper filter and a well thought out filter box and put the MAF in the optimal location) and keep all the emissions equipment right where it needs to be, have a good flowing 3" mandrel bent exhaust system with a good sounding & good flowing muffler and i see no reason why the 7.0L Aluminum V8 would not be a great choice, after all that was the ZL-1 engine of 1969. If your going to build a ZL1, build a ZL1. And just a little wishful thinking, alcantara headliners, soft touch leather door panels with alcantara panels, alcantara suede shift knob and boot and a woodgrain trim option with that dark black color wood trim that the GMC Denali trucks used to have. The steering wheel should definately be wrapped in alcantara suede and the ZL1 emblem should be on the bottom spoke and in the center should be the Camaro badge. On the outside, instead of Chevy bow ties, the grille should have the ZL1 emblem and the trunk should have the Camaro badge on it along with ZL1 fender emblems and a ZL1 trunk emblem. Oh and one last thing, the black and red taillight design from the Corvette would set the Camaro off perfectly.
art wrote on August 17, 2015 - 12:27pm Permalink
Good thought out post on your part. I agree the Z28 should be made along with a more powerful 7.0L engine. Keep the ZL1 and Z28 separate.