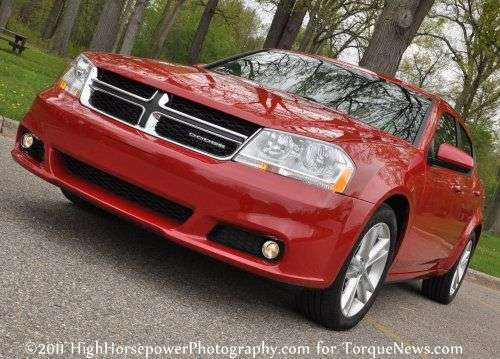 I recently had the pleasure of spending a week behind the wheel of the 2011 Dodge Avenger Heat, which included a nice long road trip to the Mecum Indy Spring Classic along with the duties of daily driving tasks – all of which clearly displayed the improvements made to the Avenger compared to the previous model year.
Advertisement

I should start by saying that I spent time in a 2010 Dodge Avenger SXT and during that time, I put the midsized sedan through similar tests as I did with the 2011 Avenger Heat; including a 1000-mile car trip. My time spent in the 2010 model really helped to emphasize the changes made for the 2011 model year both inside and under the car.

Notice, I don’t say “inside and out”, because the 2011 Dodge Avenger is very similar to the previous model year versions. The overall shape and look of the car is identical and to the average buyer, it might be hard to tell the difference between the two. However, the often harsh reviews handed to the previous Avenger never complained about the exterior appearance. That being said, the 2011 Avenger does receive a handful of subtle exterior upgrades including a more aggressive front and rear fascia, some cool LED taillights and new badging thanks to the Dodge brands’ change from the old Ram head logo to the new Dodge font logo. Other than that, the 2011 Dodge Avenger is pretty much the same on the outside as the previous version – but that is a good thing.

Once you climb into the 2011 Dodge Avenger Heat, you are greeted by an interior layout that is far more welcoming than the previous model. While my time spent in the 2010 Avenger SXT was comfortable enough – the 2011 Avenger Heat raises the bar for affordable midsized sedans. The door-mounted arm rests and center console rest are both padded with a super soft leather finish – something like you would expect from much more expensive luxury cars. My 2011 Avenger Heat was fitted with two-tone cloth seats with the center section featuring a sporty, red finish that fit nicely with the dark red exterior. The seats are deep and comfortable, with power adjustments for the driver and heating elements for both the driver and front passenger – all of which makes the 2011 Avenger feel more like a luxury car and less like a rental car.

The front seats provide plenty of room for a very tall driver and/or passenger while not crushing the rear passengers too much and so long as you don’t have any NBA players with you, the 2011 Avenger will comfortably seat 4 adults. If cargo space is a concern of yours, the large trunk includes a pass through window for long thin objects (like fishing poles or hockey sticks) and if you need room for lots of cargo, the rear seat folds flat to provide a large open cargo area that runs from the trunk to the back of the front seats.

Like the door panels and armrests, the dash receives some of Dodge’s new super soft padding around the gauge cluster with red stitching adding to the sporty feel of the interior. Under that padded leather dash pad is a redesigned gauge cluster, featuring three black, white and red gauges that incorporate a driver’s information center that is controlled by the buttons on the steering wheel. By the way, the steering wheel is also new for 2011, with a three spoke design packing buttons on both sides (controlling the driver information, the stereo system and the cruise control) along with a pair of “trigger” style buttons on the back of the steering wheel to give more control of the advanced AV system without taking your hands off the wheel.

My 2011 Dodge Avenger Heat was not equipped with the high end Boston Accoustics stereo system but it did come with the Media Center 430 CD/DVD/HDD head unit, which offers 30gig of hard drive memory to store your favorite songs. This high tech infotainment system is controlled by a 6.5” touch screen or the steering wheel mounted controls and even though I didn’t have the fancy Boston Acoustics speaker system, the Avenger Heat packed impressive sound quality and clarity for a standard stereo system. Provided the right type of music and right songs, the standard Media Center 430 system hits nice and hard – harder than some aftermarket systems I’ve seen in my day.

Finally, one of the key complaints with the previous Avengers was the level of interior noise and while the sound system in my 2011 Avenger Heat was more than enough to drown out any road noise – Chrysler’s engineers did the rest. Cruising on the highway at 70mph, you find a nice, quiet ride for the driver and passenger. If you hit some of the massive potholes on I696 you can hear it but the 2011 Avenger does away with the ‘rattling’ of the previous models through extensive noise, vibration and harshness (NVH) improvements caused by many of the basic bumps and rough spots on our nation’s highways. Even when traveling on a rough dirt road, the new Avenger is leaps and bounds quieter than the outgoing model. When you combine the new, quieter interior with the increased level of comfort and the high tech infotainment system – the 2011 Dodge Avenger Heat is definitely a step above the competition.

Click here for part two of our 2011 Dodge Avenger Heat review where we look at the handling and performance of the midsized sedan, powered by the new Pentastar 3.6L V6!