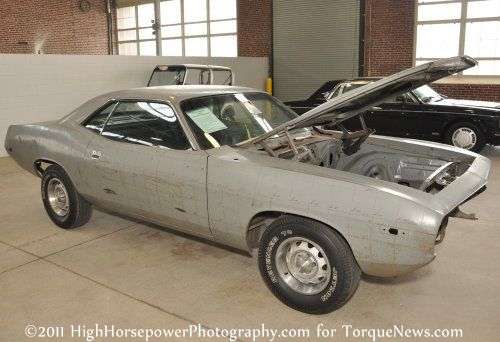 The 2011 Mecum Spring Classic Auction in Indianapolis is chock full of amazing vehicles but nothing Ive seen before at Mecum – or anywhere else – is such a unique piece of muscle car history as the 1974 Plymouth Cuda Tooling Proof Body.
Advertisement

Few people may even know what a tooling proof body is but before the age of fully computerized production took over, the 1974 Plymouth Cuda Tooling Proof Body would have been the very first 1974 model vehicle built to check the correctness of the assembly line setup. Basically, prior to building 1974 Cuda’s for the public, Chrysler would have used the car shown on the right to make sure that the assembly line procedures and settings were laid out properly. Most people have never heard of a tooling body and even fewer have seen one as these vehicles are always destroyed after use on the assembly line…so how has this car come to exist?

Well, in 1974 famous drag racer Dandy Dick Landy needed a new body on which to build his next competition drag car so he came to Chrysler for a new Cuda. They did not have a car ready for him so they instead sold him their 1974 Tooling Proof Body for the new Cuda – sold as a body in white. Many cars produced strictly for race purposes are sold as “body in white”, which means that they are basically just the chassis and body itself with no electrical, mechanical or interior items. After Dick Landy got his hands on this car it was sent off to a company that specialized in lightening up race cars of the day by acid dipping them. However, before the 1974 Tooling Cuda hit the acid, Landy found himself a 1974 Dodge Dart and the rare tooling car was spared. From there, the car went from the hands of the company originally tasked with selling the car to Landy to a private owner and then another, before ending up at the 2011 Mecum Indy Auction.

Since the car was never acid dipped and never prepared for street use, it still bears the scars of the tooling procedures. There are lines scribed perfectly into the body every five inches on a horizontal and vertical axis with hand-written denotations made at every line and where the machinery on the production line needed to drill holes (for things like chrome strips and the rear badging – they weren’t all held on by two sided tape back then).

There is literally no other car in the history of the American muscle car that is rarer than this one, because this was car never supposed to see the light of day. I’ve spoken with Chrysler and Ford employees from decades back who haven’t ever seen one of these cars outside of the production facilities so for this car to be available on the open market is incredible. Along the way to the Mecum auction from leaving the assembly line in 1974, a private owner added a steering wheel and steering assembly, tires and wheels and a rear differential. This allowed them to move the car around with the plans of adding the rest of the items needed to make it streetable but instead, the car was sent to Mecum in the same magnificent fashion as it was 37 years ago.

The problem is that since no car like this 1974 Plymouth Cuda Tooling Proof Body has ever reached the public there are two main questions:
1. What is it worth?
2. What do you do with it…leave it as it is or turn it into a drivable vehicle?

Well, evidently those questions went unanswered as the attendees at the 2011 Mecum Spring Classic in Indy passed on the 1974 Plymouth Tooling Body as the highest bid was just $20,000 – failing to meet the owner’s reserve price. This means that the chance to own this incredible piece of automobilia is still out there and if you want more information about buying the 1974 Plymouth Cuda Tooling Proof Body, click here!

Check out the gallery below for a closer look at the unique 1974 Plymouth Cuda Tooling Proof Body.

Other Mecum Coverage:
Paul Dehnert’s 1994 Corvette ZR-1s sell at 2011 Mecum Indy
The Mecum 2011 Indy Spring Classic has something for everyone

SS wrote on May 19, 2015 - 10:23pm Permalink
If this does not have a proper VIN it is worth the sum of it's parts. Is it "one of one"? Not really because it was never built. It's not a car, IT'S JUST PARTS...nice parts. OK so Dick Landy had it yay. Nice guy, but it was never a race car. What would it cost to get a '74 slant 6 or 318 car apart and stripped ready for paint? The marks should be well photoed & saved for posterity. It still can never really be anything but a '74 360 car, so not a lotta love there. If not, it will be an undocumented clone of whatever else it becomes, not a "real" hemi, 440 etc. Maybe rescue a earlier totaled real Hi-perf car. Dude should have taken the money. Ain't no museum piece.