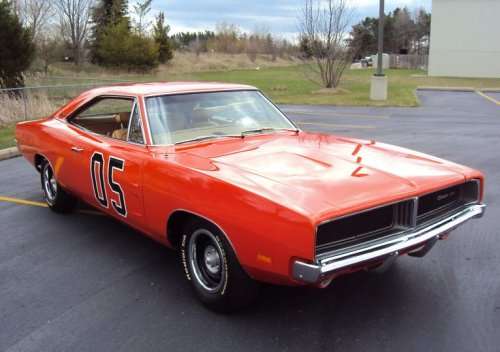 Jalen Rose is best known for being a member of the University of Michigan’s “Fab Five” but Rose is also an avid car collector and among his collection is an original 1969 Dodge Charger “General Lee” from The Dukes of Hazzard – a car which Rose is auctioning off for charity on May 24th.
Advertisement

Jalen Rose’s playing days are over but he has become a well-known TV personality on ESPN and Fox Sports. Rose also started the Jalen Rose Leadership Academy (JRLA), which is destined to be the benefactor of the college hoops star auctioning off his uber rare 1969 Dodge Charger “General Lee”…with the auction starting at just $40,000. You can read more about the JRLA by clicking here.

The unique 1969 Dodge Charger General Lee is currently in the possession of a high-end used car company in Brighton, MI – Kip Sheward Motorsports. Sheward has a great website packed full of luxury and exotic vehicles from Lamborghini to BMW to Dodge, ranging from vintage muscle cars to the new Chevrolet Corvette ZR1. According to the Sheward website, Rose’s 1969 Charger was one of the last four Chargers used on the set of General Lee and show co-star John Schneider (Bo Duke) has signed the underside of the trunklid. Provided that all of the information can be provided, this is a rare chance to own a piece of automotive history…while also helping out a great charity at the same time.

The bad news is that Jalen Rose customized the car while owning the 1969 Dodge Charger. On the outside, Rose had the “General Lee” font removed, along with the rebel flags and the recognizable 01 digits on the door. In place of the General Lee name above the side windows he has inscribed “Longboy” (a nickname given to him by his grandmother when he was a child) and in place of 01, he has 05…5 being his number while at U of M. I can certainly understand him wanting to own a customized 1969 Dodge Charger but it seems like a crime against motoring history to customize one of the actual Dukes of Hazzard General Lee Chargers. He could have just as easily gotten a ’69 Charger, painted it orange and tossed some decals on the side - Decals which don’t look to be quite the same shape as the proper numbers that came on the General Lee.

In addition to the wrong number, different name on the roof and no flag, this General Lee is missing the recognizable “turbine” wheels, although one of the pictures on the Kip Sheward websites shows that this car has a turbine wheel holding the space in the trunk. In their place is a set of what looks to be very clean Chrysler Rallye wheels; which are sought after by Mopar guys but not correct on the General Lee. The 1969 Dodge Charger is also missing the front push bar from the TV show, the red and white CNH 320 license plate and there is no roll bar.

There is also the engine. While the majority of General Lee Dodge Chargers were fitted with small block V8s (they were lighter than the big blocks and they “flew” better) but Rose’s General Lee is powered by a modern 360 cubic inch V8 crate motor. There is no mention of what happened to the original motor but Sheward Motorsports provides the VIN, which indicates that this was originally powered by a 318 cubic inch V8. While I can understand Jalen Rose’s want for more power than that offered by the 230hp factory engine but it’s not like he swapped out the original motor for a monster 426 Hemi…so it seems like a pointless devaluing of the vehicle. I won’t even get into the rampant use for zip ties in the engine bay…but you can see this interesting piece of automobilia via the Kip Sheward Motorsports website by clicking here.

Don’t get me wrong…it is very admirable that Jalen Rose does so much for youth charities and it is awesome that he is auctioning off his gorgeous 1969 Dodge Charger. However, as a lifelong Mopar guy and a fan of the Dukes of Hazzard – it is kind of blasphemy to see it ‘customized’ in this manner. Hopefully the person who wins the auction on May 24th buys the car with the hopes of restoring it to look like it did when it raced through the dreams of every kid in America. This also means that if you are some wealthy individual who can afford to drop a hefty chunk of change on a 1969 Charger and you are reading this, shaking your head at the changes made during customization, this is your chance to return to its prior glory.

(Image courtesy of the ebay listing)

Other Chrysler News:
Chrysler idles truck and SUV plants due to Japanese earthquake
Chrysler may hire 3,000 - add shifts in Michigan and Illinois
The Ram Long Hauler Concept makes its formal debut at the 2011 Kentucky Derby
The Ram Brand sponsors the 2011 Kentucky Derby
The Chrysler Group shows strong growth in April 2011 sales
Dodge to bring back the Charger Super Bee
The Jeep Wrangler lineup to get Pentastar V6, perhaps a diesel option

Elon Musk Says Tesla To Offer Car Insurance in Texas Next Month, But These Challenges Exist
Tesla Co-Found Plans To Build a Battery Factory and Shift The Industry
END_OF_DOCUMENT_TOKEN_TO_BE_REPLACED